A decade working with the Blue Man Group gave Michael Napolitano an above-average dose of the surreal. After a 10 year stint (and five CDs) as the Preschool of Rock, he's twisted his vision into Michael and the Rockness Monsters. Their new CD, FUNNY FACES, pits the ordinary ("Babies Cry") up against the extraordinary ("Squirrel Fight"). Your kids won't know what's coming next. 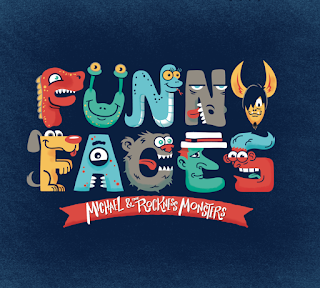 "Mr. Pickle" is a 1940s boogie-woogie jazz number as engineered by Frank Zappa. The novelty tune "Elevator Song," currently getting airplay on SiriusXM's KidsPlace, harkens back to Mayor Monkey once forcing Recess Monkey to live in an elevator. There are still many handprints that FUNNY FACES is blueprinted for messy little hands, from "Feet for Hands" to the prototypical "you are special" song, "Everything Anything." Michael even enlists his 92-year-old Aunt Jo to participate on the family-themed "So Happy."

Assisted by a host of talents (including Tim Sutton from Ratboy Jr, Tracy Bonham, Sonia de los Santos), FUNNY FACES was helmed by children's music über-producer Dean Jones. Side note – I referred to Dean in a conversation using that exact term and received the response, "He runs Uber?"

Growing up is a confusing time. Adults say one thing and mean something else. What exactly is a double entendré? What is an entendré, for that matter? Michael and the Rockness Monsters deliver a safe space with songs that sounds like fun for intrepid minds. With FUNNY FACES, Mr. N delivers his valedictorian project as he graduates from the Preschool (of Rock). And he's still kidding. In this case, that's a good thing.

FUNNY FACES is available on April 28 from Michael and the Rockness Monsters' website, Amazon, and iTunes.

Here is the video for "Cosmic Vacation":