You know the Junos? If you live in Canada, it's their equivalent of the Grammys – except for Canadians, you see. Anyway, Juno nominated Marlowe & the Mix have released LIVE IN COLOUR and have brought their brand of high energy power pop across the border. The dance quotient is incredibly high, if only due to the presence of the "Mix Kids," younger artists that Marlowe mentors and puts front and center on the CD. 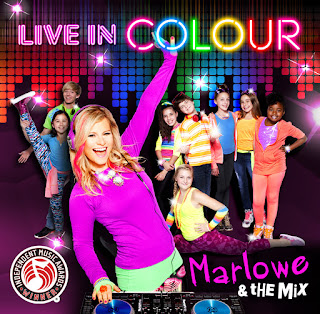 Marlowe Stone had a revelation about music for children in 2013. Once kids "age out" from the Wiggles, they are still too young for Miley Cyrus and Demi Lovato. She decided to branch out into that gap, creating Marlowe & the Mix as a "gateway" between kiddie music and teen favorites.

On second CD for children, Marlowe & the Mix sound somewhat like Kidz Bop originals, with
"Show Your Glow" and "Video Game Insane" being Exhibits A and B. And the upbeat attitude reaches its crescendo with the empowerment anthem "Allstars Shine On" that closes the CD. Marlowe hit #1 on iTunes Canada recently, so now the States are clearly her next target. She's ready to mix it up and so are the Mix kids.

LIVE IN COLOUR is available Marlowe & the Mix's website, Amazon, and iTunes.

Brady Rymer has a new video shot all along the back roads and fields of the little town of Southold on the North Fork of Long Island, NY. As Brady told NAEYC last month, "The inspiration for the song came from a book: Me on the Map by Joan Sweeney. I loved the idea of children knowing and finding their place in the world: appreciating where they live, learning about their special spot — and “me on the map” is such a singable phrase, I just went for it. I played harmonica, a classic American folk instrument, on the song because it expresses so well the lyrical themes of country, land, pride."