Not Kidding, Just Kidding A Boon at Symphony Spce

More than a decade ago, we made the trek from Queens into Manhattan, drawn like moths to a flame by the lure of good independent children's music (i.e., kindie). My son Ben was three years old and he'd been listening to the standard kid fare – Sesame Street and the Wiggles (whom we'd seen live the previous month). Now it was time to dare, to try something new – a live kids music event that wasn't packaged and choreographed. There would be interaction. There would be an opportunity to perhaps speak with the musicians. It was Dan Zanes. It was Symphony Space. 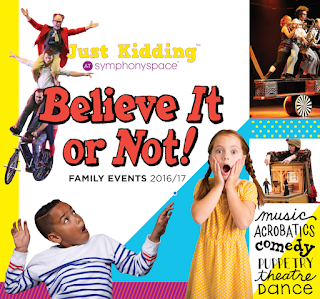 We have returned again and again. With Ben. Then with his younger brother (Matt). Ben has mostly aged out of the theatrical events but still loves the live music experience. They are both looking forward to Justin Roberts returning to New York on December 10. In the meantime, the Just Kidding Kids series has kicked off this month with a host of activities (live theater, book club, musicians). JKK program director Darrin Critz has booked a bevy of experiences for youthful audiences. Acts from the West Coast (Lucky Diaz) as well as classic German puppetry (Sandglass Theater) fill the 2016-2017 schedule.

This weekend, it's the Lightwire Theater – taking the story of "The Ugly Duckling" and bringing it to life in a high-tech production that uses electroluminescent wire to create glow-in-the-dark 3D puppets and props. It's a unique type of artistry that's sure to dazzle young viewers. And just the sort of thing that Symphony Space has been bringing to New York area audiences for longer than I can remember.

It's through regular trips to Symphony Space (and the Upper West Side, where their grandfather conveniently lives) that my sons have developed an appreciation for live theater, interactive audience experiences, and many genres of music. They treat performers like "normal" people and over the years, repeat visit have translated into musicians remembering MY kids. I've often done the comparison and said, "I don't think Paul McCartney would recall Ben seeing him at Barclays Center five years ago."

Other acts coming this season include Portland's folk revivalist Red Yarn (Andy Furgeson) on Feb. 4 and Oklahoma's two-man power duo the Sugar-Free Allstars (Mar. 11). Next month, there's a show for the whole clan – the Big Family Quiz Thing (Nov. 13). And the adjacent Kids Book Club brings in Newbery Honor-winning author and illustrator Grace Lin for a discussion and reading from "When the Sea Turned to Silver" on Nov. 5.

Just Kidding shows include "Social Space," where community vendors provide activities, giveaways, and more at the back of the Peter Jay Sharp theater. Plus you never know who you might run into – local artists support their peers. At a Recess Monkey concert a few years back, Jason from the Pop-Ups was just another excited audience member. So head on down (uptown) to Symphony Space in the next few months, and bring the kids. No kidding, it's a lot of fun. Click through on any performer for ticket information.
Posted by MrJeff2000 at 6:47 AM