If positive affirmation had a band name, it might be Vanessa Trien & the Jumping Monkeys. Back with their fourth CD, WONDERFUL YOU (get the idea), the brightside Bostonians deliver a dozen sunny, feelgood tunes for tots, toddlers, and youthful students. 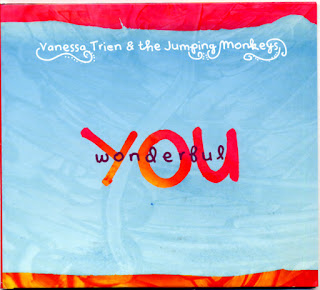 The CD practically radiates its central concept, a celebration of family, friends, neighborhood. and community. You don't have to read between the lines on a song like "Shine":

Greet your family and friends hello
Give a hug, how you love them so
Hear the laughter and join right in
It feels all right with everyone tonight
And the love is burning bright and you will shine

Alastair Moock is on hand to kick things off with the singalong "One Foot in Front of the Other," which sounds like a missing track from his release, "Singing Our Way Through," an album tracked his daughter's successful battle with cancer. Trien lauds her New York roots on "Fireworks," as its chorus marvels at "fireworks over the Brooklyn Bridge." Former Dan Zanes bandmate (and Boston area resident) Barbra Brousal is featured on two chipper songs, "Round and Round We Go" and "Feeling Thankful," which also has Rani Arbo on vocals. While I'm listing guest performers, here's a tip of the hat to Mister G (Ben Gundersheimer), who lends five fingers for a cover of "Willie and the Hand Jive."

There's nary a dark cloud or acknowledgement of a bad dream on WONDERFUL YOU. Making a joyful noise is the over-riding mission, right down a cover of the Beatles' "All Together Now," where Trien's kids Ellis and Laila (and their pals) join the chorus. Doubt is not an option on WONDERFUL YOU, a highly unusual stance in this quirky election season. But that's the world of children's music, where a gentle "Circle of Friends" singalong closes out the disk and resets the table for a new day of engagement and entertainment.

WONDERFUL YOU will be available on October 14 from Vanessa Trien & the Jumping Monkeys website, CDBABY. and iTunes.

Here is an almost brand-spanking video of the band performing their new song, "Shine":