Jennifer Paskow has delivered her IndieGogo project of children's songs, MAKE A CIRCLE. It's a sweet, fast life-affirming set of songs that perfectly suits her persona. Jennifer performs at many children's hospitals. Tunes such as "Listen to Your Heart" and "On the Inside" should brighten up many a sick room. 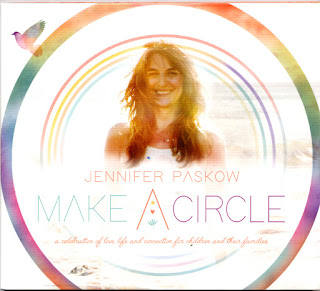 I've lost count the number of times an artist has described their pursuits as spiritual and managed to work yoga into the same sentence. I'd be a down dog to throw Kira Willey under the mat here, but she's the first name that comes to mind. Paskow follows a similar mindset, having moved west after starting her musical career on the gritty streets of New York City.

Don't look for miracle cures on MAKE A CIRCLE. The intent is to gently entertain and Paskow acutely targets her young audience. "The I Love You Song" (and its reprise) work in the classic "Bushel and a Peck." And the traditional "This Little Light of Mine" gets a sunny rendition that matches the fervor of previous kindie cover versions by Dan Zanes and Brady Rymer. This is not music to change the world, it's songs for lighten the heart and change the mood. Everybody should make a circle for those sentiments.

MAKE A CIRCLE will be available September 30 from Jennifer Paskow's website, iTunes, Amazon, and CDBABY (links not live to this CD yet).
Posted by MrJeff2000 at 8:55 AM