History is making a comeback! The hottest ticket on Broadway is Hamilton. Among the hottest online sites is Epic Rap Battles of History. One of the hottest TV shows is Drunk History. And who was cultivating this trend way, way before any of these Johnny Come Latelys? Lloyd Miller and the Deedle Deedle Dees, that's who. 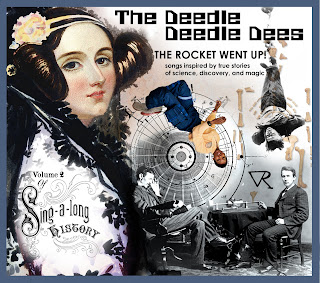 Last year, Lloyd embarked on his "Singalong History" series with GLORY! GLORY! HALLELUJAH!, which centered on the Civil War and that tumultuous period in our country's evolution. This followed the Dees' three CDs that began their travels down the passageways of time. Volume 2, THE ROCKET WENT UP! further advances their brand with a veritable pinball machine's worth of content, from legendary magician Harry Houdini to Typhoid Mary to swimmer Diana Nyad. I guffawed out loud at "I Remember You, Lucy," a song that sounds like a love ballad until you realize it commemorates skeletal remains.

Edison: I'm the inventor the whole world will remember.
Tesla: Whatever you say, boss. Here's what's funny –
You don't have friends but you do have money.
Edison: Yeah? Well at least I'm not a neat freak.
Tesla: Clearly. Did you change your pants this week?
Edison: The world won't even know who you are.
Tesla: I don't know. Have you seen my new car?

Miller and fellow Dees Chris Johnson and Ely Levin have a deft sense of what kind of history kids might enjoy, or ways to engage them through song. "Dissolve" takes on the difficult topic of Nobel Prize winners melting down their medals while the Nazis were on the march. Indeed, there's even a horn section. Another rap tune, "Ada Lovelace," quickly delivers some girl power to the woman who wrote the first computer program. And kids get their say on the quirky "Stephen Hawking, Can You Fact-Check This?"

The CD was a long time in coming (five years) and the band issues a statement of purpose on "This Is For You," delivering a positive affirmation of their goals. This is driven further home in "Super Strong," talking about personal achievements such as public speaking and recovering from surgery. The Dees overriding sentiment is that history does not have to be dull or dry; these were people and times that can come alive in contemporary terms (hence rap). Healthcare workers dealing with Ebola and Zika even get their own anthem, "Every Time I Stand Up (I Feel Like Falling Down)." Shakespeare said, "What's past is prologue," which kinds of indicates that our best days – and the coolest songs about our past – are still ahead. Strange dees, indeed.

THE ROCKET WENT UP! is available from the Deedle Deedle Dees' website, CDBABY, Amazon, and iTunes.

Here is the video for the song, "Houdini":