Not every song about happiness needs to be sarcastic and melancholy. How's that for an introduction to a review of BUBBLE WRAP, the new children's music CD from Eric Herman and the Thunder Puppies? The Rolling Stones recorded a song called "Happy" that was jaded and lewd. "Happiness" from the show You're A Good Man, Charlie Brown will reduce you to a puddle of your own tears. By that definition, "Hello," the closing number on BUBBLE WRAP, on the surface is an upbeat, simple, and earnest reminder that there's no bad time to say hello. Until you read the fine print...it's a tribute to Eric's late wife and co-writer Roseann Endres, who died during the creation process of the album. Its lead in, "Okay," was written right before and just after she passed away, and finishes with the haunting refrain, "I'll love you always," accompanied by their two daughters, Becca and Evee. 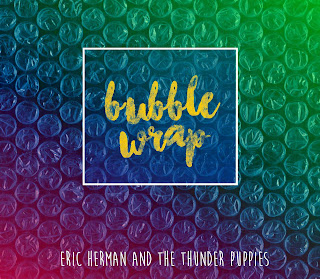 Great art can come from turmoil, tragedy, and struggle. Heck, Van Gogh cut off his own ear. But a smaller, personal family affair can change the dynamics for everything. It took Eric Herman five years to pull together his last CD, PARTY ANIMAL. At that point, he resolved not to put his recording career that far on the back burner. For the first time playing a full CD with his entire band, the Thunder Puppies, Eric delivers music both from the child and parent perspective. The six-minute-plus "Everybody's Watching" builds to the reveal of the protagonist gulping that he's backstage and petrified with stage fright:

I know they all will laugh at me
And this play is not meant to be a comedy.
I can't go on stage now
Because everybody's watching me.

Attention must be paid to the Thunder Puppies - Dave Pettey, Ben Macy, Chris Baugh, and Javier Ruiz. They take some of the workload off Eric, allowing him to concentrate more on his duties as lead singer and band frontman. Who else would rock out so hard on a song declaring "You Are What You Eat." The band gets to go full-blues mode on "Where's Saturday," while depicting the tedium of the typical school week.

Eric uses his ironic perspective to its best advantage on tracks like "Phone," where a child's youthful exuberance is tested by his parents obsession with their mobile technology. Has the invasion of the body snatchers been manufactured by Apple and Samsung? It's quite possible. Guest performers Keith and Ezra (Trout Fishing In America), Roger Day, Mister G, and children's poet laureat Kenn Nesbitt enliven every adult's regular treatise to "Take A Bath." The band deals with managing expectations on "What I Want," possibly a response to PARTY ANIMAL's "Can We Buy a New Car (So I Can Have a Balloon)?" It also serves as the appropriate setup for "Everybody's Watching." And what adult male hasn't at some point wished "I Wanna Be That Guy" who exudes positive role model testosterone from his pores.

Eric Herman invites your inner child to join him and the Thunder Puppies on a playdate. While you're at it, bring the kids. The music's ostensively for them, isn't it? Otherwise, who's going to point out the mathematical illogic on "Sunflower Seeds"? Music can educate, music can amuse, and music can help quell fears and sadness (not completely, but it fills the void). Eric Herman has more than 50 million YouTube views on his channel. If that were the only true measure of artistry, he'd be a household name. Well, he is around ours. With BUBBLE WRAP, Eric Herman is back on top of his game and looking for new fans to say "Hello." As the final line on the CD declares, "Any time is a good time to say hello." Are you ready?


BUBBLE WRAP is available on June 10 from Eric's website, Amazon, CDBABY, and iTunes.

Here is the video for "What A Ride," from the CD of the same name: