Charm will open a lot of doors. And 123 Andrés is certainly charming. But don't be fooled. Latin music artist Andrés Salguero is cultivated as well – he's got a doctorate in music to prove it. With his second bilingual children's CD, ARRIBA ABAJO (Top to Bottom), Andrés teaches vowels, the musical scales, counting (with birds), and the wonders of nature. 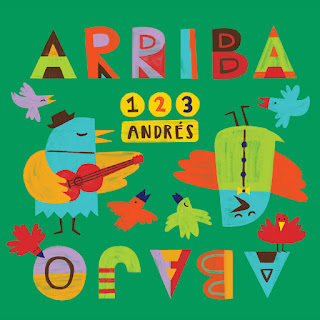 The first 10 tracks are mostly in Spanish, with English versions following. Music continues to be the universal language. Matthew (5) can't speak more than 2-3 words of Spanish, yet went around the house repeating "Dame una A" after watching the animated video on Andrés' YouTube channel. I didn't have the heart to play the English version ("Give Me An A") that follows later on the disc. His first CD, ¡UNO, DES, TRES, received a nomination for a Latin Grammy award. Andrés now seeks to follow up by widening his base across both cultures.

I am by far not the ideal candidate to promote multi-cultural diversity. While I advocate for equal rights and self-expression, I grew up in a neighborhood that was decidedly middle class (and mostly white). When the racial climate in our Jersey suburb not-so-subtly shifted (and I became the target of bullying from some of those migrating elements), my family took flight to Long Island. That was decades ago but there are still lingering memories. However it's not the fault of the music or the arts. And I wholeheartedly endorse the values and sentiments of the talented artists who appear on this and other multi-ethnic CDs. {So much for full disclosure}

The music is part of a larger mission, as Andrés will release an accompanying "learning guide" later next month to explore Spanish/English concepts more in depth. ARRIBA ABAJO (top to bottom) indeed, as Andrés delivers an educational, entertaining message for very young listeners. Music is a subliminal teaching instrument – children who flee from a traditional classroom setting find inspiration and amusement in the auditorium or the band room. Andrés puts finicky learners directly in his melodic crosshairs – his persuasive percussion most effective on tracks such as "Diez Pajaritos (Ten Birds)" featuring Colombia's Nathalia Palis. Whether in English or Spanish, Andrés makes a sincere effort to charm your kids. Muy bien, Andrés. And gracias.

Here is Andrés'  video for "Dame una A":