Girl power is all about entitlement and freedom from societal shaming.

Chibi Kodama's John Cullimore is girl-overpowered. His band features himself, songs co-written by wife Yvonne, and four of their five daughters (Aletheia, Adaryn, Chasah, and Saoirse). The Cullimore house, one surmises, may have permanently-nailed-down toilet seats. 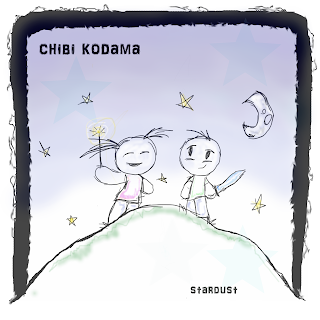 The band's new CD, STARDUST, has 15 new tracks (as well as acoustic versions of two older tunes). Chibi Kodama delivers nearly one hour of power-pop pitched from a child's perspective. The album kicks off (literally) with the '90s grunge of "Boredinary," buzzsaws into "Walk Like Me" and catches its breath with "Daydreamer," with the refrain "I was made to be me." That seems to be the over-riding theme, parboiled down from "free to be...you and me."

Much like the Spice Girls were all about girl power, Chibi Kodama is all about kid power. "Different Like Me," "More Than Just..." and "Crazy Idea" promote the notion that all children are created equally to have fun, do their own thing, and not be stigmatized for thinking outside the box. With hands-on, 24x7 online support from Mom and Dad all the way down the line, Chibi Kodama is the prototype new millennium family band.  And the band walks the walk, talks the talk, and rocks the rock. The title track delivers a hint of the Cullimore family's spiritual side:

My dad was in the software business, and when my employment options went through a wormhole 25 years ago, I wound up (as a writer/editor) in the software business. John makes music and one hopes that as his girls continue to mature and evolve, that they will determine their own paths. But he (and Yvonne) have given them a large footprint of how to proceed. How many non-Disney performing kids can Google their own discography back to their preteen years? Whether the band made the kids or the kids made the band, Chibi Kodama is an ongoing adventure and you can peer in through their YouTube channel. Watch and listen and learn and decide for yourself. It's only rock and roll but they like it, at any age.

STARDUST is available from the band's website, Amazon, and iTunes.

Here is the video for the group's song, "Moonlight Dance," produced by 13-year-old Aletheia: