Alan Lomax would be proud to see the current movement of artists celebrating and reinvigorating Americana music. From Elizabeth Mitchell recording the songs of Ruth Crawford Seeger to Red Yarn creating pioneer-style animal puppets for his videos, it's sure as shooting a great time to whet your whistle. 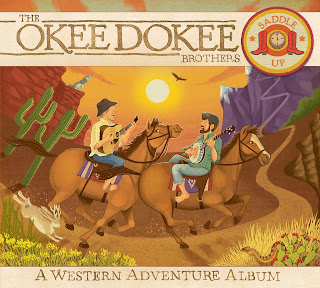 Near the top of the mountain are the Okee Dokee Brothers (Joe Mailander and Justin Lansing). The Grammy-winning duo are back with their third collection, SADDLE UP, which comes with a DVD of their adventures on a 30-day trip through the Continental Divide. The sky-climbing range pours water in one direction to the Pacific Ocean and flows to the Atlantic Ocean on yonder side. The childhood friends used the opportunity to record 15 songs that vary from Depression era optimism ("Hard Road to Travel") to Native American Indian culture ("Sister Moon and Brother Sun"), inspired by a stop at the Navajo nation in Northern Arizona.

The focus is decidedly on important cultural concepts from around the turn of the century and just beyond. There's nary a "let's drive fast" reference, since the horse was the primary method of transportation (if you weren't taking a cross-country train ride). Hence the title track, "Saddle Up," as well as "One Horsepower" and "Lead a Horse to Water." Instead of indoor pets, Joe and Justin jostle and josh about heifers in "Cow Cow Yippee":

It's a love/love relationship we all agree
I love my cows and they love when I feed 'em.

I got an odd re-introduction to American music in my high school years. I'd aged out of little kid music programs (and besides, we had moved to Long Island and I had yet to learn how to drive). Uncle Floyd was a cult presence on cable and I fell under his sway. I bought several of his novelty singles, which were structurally sound. His band was led by brother Jimmy, who currently plays with the house band on Conan. Floyd was obsessed with the old West as well, recording "I'm My Own Grandpaw" and a remake called "Deep in the Heart of Jersey." I can hear elements of those songs on SADDLE UP, from Cindy Cashdollar's steel guitar on "Shootin' Star" to Carlos Medina's accordion on "Somos Amigos."

The one weather-worn cover tune is "Don't Fence Me In." The song Cole Porter wrote from a poem be bought for $250 (true story) is not shoehorned or oddly out of place. The uninitiated would think it an original song, comfortably nestled by the campfire. I've run out of superlatives for über-producer Dean Jones, who works his quiet magic once again. Have I mentioned John Sebastian? He's here as well. SADDLE UP's rustic sound puts you out West under the skies, roaming and exploring and telling tall tales for nighttime entertainment, in the pre-electronics era.

The best testament to any artist are the reactions from their audiences. It may be a matter of cowboy semantics, but Matt (5) felt obligated to correct me when I sang "Cow cow yippee aay yay." He said, "Daddy, it's cow cow yippee yippee yay," before proceeding to sing it for the next 30 minutes. The chorus line, that is. Okee dokee, pardner, you said it.

"Saddle Up: A Western Adventure Album" is chronicled in the 45-minute DVD packaged with the CD. Join Joe and Justin for a little history, some amusingly bad tunes that didn't make the cut, and vistas that take your breath away. You'll learn about fly-fishing along the way. There's even a real-life "Jackalope" puppet, courtesy of the aforementioned Red Yarn. If you pass on the CD, the video will be streaming on Netflix starting June 1. Speaking of ancillary merch, the Okee Dokee Brothers' first storybook, "Can You Canoe And Other Adventure Songs," hits e-seller shelves this month as well.

SADDLE UP is available May 13 on the band's website, Amazon, and iTunes.

Here is the video from the CD's title track, "Saddle Up":