Space Cadets to the Rescue!

Tim Kubart and Matt Puckett remember being kids. In fact, they've encapsulated their memories on ANTHEMS FOR ADVENTURE, their first full-length CD as Tim and the Space Cadets. 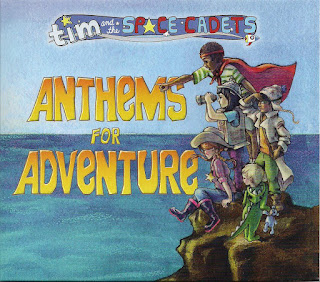 The Brooklyn residents are already veterans of the New York kindie music scene, having played gigs around town for the past few years. The new CD shares their loves of all things small and insignificant, such as "Bumblebee" and "Rainy Days" (featuring Alison Bartlett, Gina from Sesame Street).

There are also songs that triumph the big deals in a kid's existence, whether it's the power going out ("Blackout") or making a deal with the sun to extend the weather ("Endless Summer").

The Space Cadets' big breakout was the tune "Superhero," about the longing for superpowers and larger-than-life action. The song inspired the album's theme, which comes with two separate songs, "The Anthem Part 1" and "Part 2" to start the CD.

I was kind of partial to "Second Grade Show," since I have fond (and not-so-fond) memories of many past stage performances and glories:

I gotta look good in my brown and green
And I gotta stay real still tonight 'cause next time you see me,
I'll be playing a tree in the second grade show.
My parents coming to see.
And if you're trying to fine me
I'll be shaking my leaves.

The Space Cadets remain upbeat and lively as we enter 2013. And why not? Who couldn't use a blast of positive energy and summery fun in the dark of winter. ANTHEMS FOR ADVENTURE is due for "Blast Off" (another song on the CD) at the end of January. Grab your cowl and cape and head out (the door, not the window) or to your nearest e-tailer.

Here is the video for "Superhero":

ANTHEMS FOR ADVENTURE will be available through Tim and the Space Cadets' website, Amazon, CDBABY, or iTunes.