A Hoot and a Holler From Jambo

Didya ever wonder what a Lyle Lovett album for kids would sound like?

Chances are, it would sound a lot like Jambo's new album, HOOTENANNY. 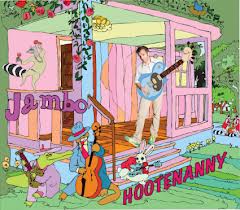 Frontman (and sideman and co-producer) Steve Pierson prepped for this gig by playing the blues around Los Angeles, prior to his daughter Lucy's birth in 2002. Turning his attention to music production for film and TV, Steve could not turn away completely from a desire to create roots-based music.

As pointed out in the Blues Brothers movie, there is both country AND western music. Steve's Jambo project creates American music that doesn't immediately make you think of slide guitar and cowboy hats.

The mashup of blues and kids music comes full-circle in "Don't Play With Your Food." You get wailing blues guitar and piano as well as childrens' vocals on the chorus:

In a perfect world, you could take the family on vacation to New Orleans, walk into a honky tonk, and they'd be playing Jambo. Distancing himself from strong messaging, Pierson sticks with positive messaging for his preteen audience. "Be Yourself," "Try," and Let's Be Friends" are fairly self-explanatory track titles. Playdate excitement and a sax solo rule in "Groovy Day":

Years on the road clearly paid dividends and were instrumental in Pierson's creation of Jambo. One also must give credit to strong co-production by Grammy nominee Tor Hyams. I definitely came away from HOOTENANNY with more of an appreciation for an underutilized genre on the kindie circuit. Prepare to make some gumbo; let's Jambo.