One of the truisms I've discovered in reviewing children's music is that while i get older, the themes remain the same. And so does the age of the intended audience – and clearly, those themes are for them.

Which brings me to APPLE APPLE, the latest release from the Harmonica Pocket. Principal band members Keeth Apgar and Nala Walla have always written wistful and gentle selections. But their latest CD is practically an exercise in "new parent naval-gazing" as it celebrates last year's birth of their son. 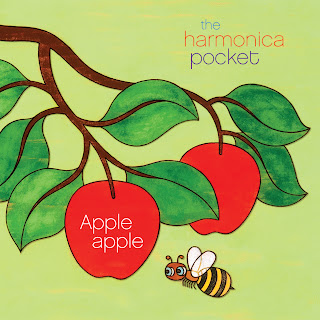 Make no mistake about it, Harmonica Pocket are serious musicians and the tunes on APPLE APPLE are perfect for the very young set. It's just difficult to segue from The Wanted on Ben's morning playlist to hearing "Diaperman," a cut on the new CD. I can't imagine Ben concentrating on anything but the melodies, however Matt (at 20 months) will be entranced by the simple repetition of "Little Little Baby":

This is my issue to work through - we've been familiar with Harmonica Pocket since "Spiders in My Breakfast" on Spare the Rock years ago. And they certainly practice what they preach. APPLE APPLE was recorded "off the grid" at their solar-powered studios on an island in Puget Sound. The CD features notables Jack Forman (of Recess Monkey fame) and Chris Ballew (aka Caspar Babypants).

APPLE APPLE will go into rotation for Matt. I can definitely picture him singing along with "I'm Gonna Count" and the title track. When Montana makes his aural appearances, I know Matt will look at the speakers, wondering where the baby sounds are coming from. Performers like the Harmonica Pocket and Renee and Jeremy fill an important space in the children's music scene – it can't all be loud guitars and deep cosmic theme. To fill a child's head with knowledge, one must take their time. And some time with the Harmonica Pocket would be well-spent.
Posted by MrJeff2000 at 8:44 AM