A New Generation of Village People

When somebody spends more than one year putting together a dream project, you're supposed to be impressed. We liked Aaron Nigel Smith's first CD, EVERYONE LOVES TO DANCE and were intrigued to hear that his new release WELCOME TO THE VILLAGE featured hundreds of voices of children from New York, Los Angeles, Portland, and Nairobi, Kenya.

So why am I less than overwhelmed? I've never been a huge fan of choral music. Or maybe it's the material. A version of Jewel's "Hands" sounds like a track from an old Kidz Bop CD. Still, you can't fault the artist for his vision. Aaron recruited Lucky Diaz, Laurie Berkner, and Secret Agent 23 Skidoo for vocals on "Man Gave Names." And Dan Zanes makes an appearance on "Grateful." And he recorded "Faga Alafia," a traditional Nigerian morning song, with Kenyan orphans. Yes, Kenyan orphans. 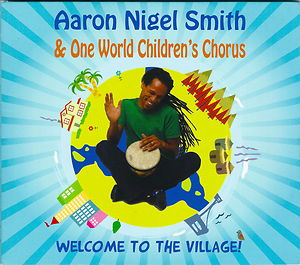 Aaron sought funding for the CD through a Kickstarter campaign for the One World Chorus, which was a rousing success. A portion of the proceeds from the CD will help build a music program at the Cura Rotary Home for the previously-mentioned Kenyan orphans. Aaron is also pursuing a virtual simulcast CD release concert involving all of the participants.

This is all very impressive, more impressive than the selections on the CD - "Banana Boat Song," "One Love," and "Wonderful World" are modern childrens standards on the verge of becoming cliches.

One wants to relish tunes like "Siyahamba," where children are singing, "We are marching in the light of God." The song closes out the CD on a positive note. And come to think of it, that's a great note to close out this review.

Click here for information on the One World Chorus. Here is a video of Aaron singing with the kids: