Peas, Butter, and Bubbles (A Two-fer)

Two new CDs for the toddler set crossed my desk recently and I've combined them into one review. Both are veteran performers/touring bands, one based in the New York City area (Hot Peas 'N Butter) and the other led by a New York native relocated to Boston (Vanessa Trien and the Jumping Monkeys). 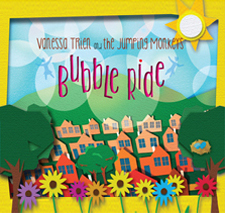 With an ensemble named after animals, you can definitely expect one "squawk and shriek" song on the new album, BUBBLE RIDE. Trien and company oblige with "Deep in the Jungle." You also get the animal-themed "Peacock Walk" and the quasi-animalistic "Tickle Monster." There is also the unexpected poignancy of "Spinning Around," about a young girl dealing with the chaos of busy family life by entertaining herself by getting lost in her favorite music.

Some days my mommy says, "Honey, we've got to do some chores."
So I hop in my stroller and we walk to the bank and the grocery store.
I get so bored while my mommy chooses bread and bananas.
Then I hear the store radio on and they're playing one of my favorite songs
and I'm spinning around, spinning around."

And when did I lose the memo on "Free To Be...You and Me" mounting a comeback? For the second time this summer, a childrens' artist has put their spin on the classic song. First it was Melissa Green, and now Trien and company. There's nothing wrong with it. In fact, it's the first song I grabbed and put in Ben's "morning songs" folder.

Built for the eight-and-under set, BUBBLE RIDE will get youngsters hopping and singing. Kick off your shoes and dance along with the toe-tapping and enthusiastic. kazoo-playing Jumping Monkeys.

I found it ironic that many parents say, "Oh, most kid's music puts me to sleep" and then I found myself reviewing an album of lullabies. Hot Peas 'N Butter took two years to polish their sixth CD, CATCHIN' SOME PEAZzz. The problem is, if they succeed, will any kids be awake by the end of the last track, "Beautiful Dream"? 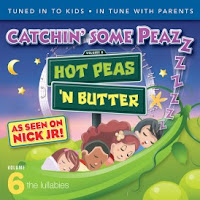 The Peas (principal members Danny Lapidus and Francisco Cotto) began performing "The Itsy Bitsy Spider" in  guaguancó style (Cuban rumba) and things went from there. You don't get that version on this CD, however. Prepare for straight-faced tunes on piano like "Railroad Bill" and guitar "In Belgian Rain." Not to mention the ubiquitous "Rock-A-Bye Baby."

There's nothing wrong with a CD of lullabies. I might need a caffeinated drink if we're playing it in the car, but in that case, the melodic tracks are not for my ears. Hot Peas 'N Butter have crafted a serene collection of naptime and nighttime melodies; call it "new diaper" ambient music.

Youngsters all need to decompress. Twenty-one-month-old Matt has figured out how to open the CD cabinet and pry open the Sesame Street compilations that I put together for his older brother, years ago. CATCHIN' SOME PEAZzz may be just the ticket to tire him out before he begins playing DJ on the CD changer.

BUBBLE RIDE is available from Amazon, CDBaby, iTunes, and at Vanessa Trien's website.

CATCHIN' SOME PEAZzz is available from Amazon, iTunes, and at Hot Peas 'N Butter's website.