Multiculturalism allows this generation to enjoy a whole new array of musical tropes. Kwanzaa was not even a holiday when I was a kid. The big deal in any Jewish household was Hanukkah – and the big song was "I Have A Little Dreidel." Followed closely by "Hanukkah O Hanukkah." Followed closely by... well, it would take several decades until Adam Sandler concocted "The Hanukkah Song." 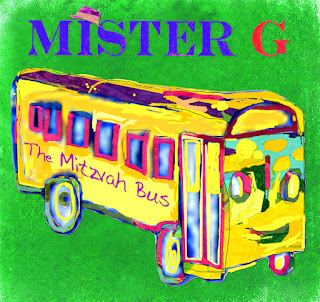 Christmas albums are still the norm (paging Brady Rymer and REVVIN' UP THE REINDEER). However an outlier crops up every now and then. Brady included a Hanukkah track. Joanie Leeds has recorded TWO secular children's CDs. Those are fun, inclusive, and won't produce as much eye-rolling as the Chabad-backed Mighty Mitzvah Kids. Into this mix throw Ben "Mister G" Gundersheimer – just don't throw him under his latest release, THE MITZVAH BUS.

Mister G has won a latin Grammy Award. His other 2017 CD, MUNDO VERDE/GREEN WORLD, was a multi-lingual ode to ecology and Planet Earth. So there's clearly a larger agenda as Ben circles the globe, walking English, Hebrew, Spanish, and Yiddish onto his bus. The semi-traditional sounding "Shabbat Shalom" succinctly sums up his thought process:

According to Mister G, his most cherished bar mitzvah present was a guitar, which served as his gateway to music education. Now he's playing it forward by honoring his grandparents and recording the reggae-tinged "Hanukkah," "Challahlalala," "Latkes for Breakfast," and more. The songs go completely around the yearly spectrum, including the descriptive "Purim Party Song" and "Camp," which seems to serve as the placeholder for a summer single.

THE MITZVAH BUS is part history lesson, part Hebrew tutorial, part holiday celebration, mostly whimsical, and entirely enjoyable. And like most children's CDs, it winds down with an appropriate good night song, here being "Lilah Tov," which translates into good night. And as long as I can go another year without having to explain "The Hanukkah Song" to my kids, it is a good night.

THE MITZVAH BUS is available at Mister G's website, Amazon, and iTunes.

Here is the video for Mister G's song, "The Bossy E":