Randy and Dave Aim High & Mild on a Trampoline

The current age of television has been dubbed "Peak TV" due to so many available choices. To a remarkable degree, the same could be said about the current age of children's music. With CDBABY, Spotify, Bandcamp, Soundcloud, and other independent options, recording artists do not have to marry themselves to a label for exposure (although it doesn't hurt). Recess Monkey and The Pop-Ups are among the musicians who have signed deals with Amazon Prime Music. On the other end of the spectrum are Randy Sharp and Dave Kinnoin, back with their second collection of tunes, LIFE ON A TRAMPOLINE. 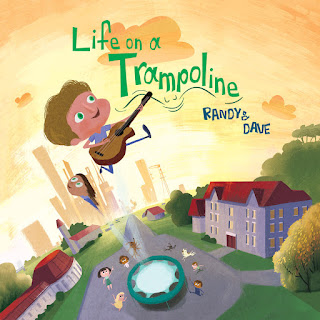 The CD starts with a lot of nonsense. "Enjoy It While You Can" begins a dozen tracks where the storytelling sometimes threatens to go off the rails. "Last Time I Was Here" is the pre-teen version of a Curious George cartoon, with a recounting of various misadventures. "Squadoosh" deconstructs an imaginary monster. Keeping with the spooky theme, "A Weird Thing Happened" is either a nightmare or an O. Henry story. Randy and Dave leave it to the listener to decide.

Randy and Dave enter the children's music arena with extensive credits under their oversized belt buckles. Randy Sharp has seven #1 country singles and has written and worked with Dolly Parton, Reba McEntire, Edgar Winter, and Linda Ronstadt to name just a few. Dave Kinnoin has eight award-winning kid's recordings and has written songs for Disney (Mickey Mouse, Winnie the Pooh, Kermit the Frog). I thought I detected some Piglet in the 100 Acre Woods in "Happy To Help," despite the 'kick yourself in the rear' finale.

Try not to sing along with the chorus of the title track, LIFE ON A TRAMPOLINE. You won't, I couldn't, and neither could my kids. Randy and Dave subvert your expectations without assaulting your senses. The CD is at turns jazzy or country but never goes for all-out head-banging rock. For a true walk on the mild side, your family might remove their sneakers for a bouncy session with Randy and Dave.

LIFE ON A TRAMPOLINE is available July 28 from Randy and Dave's website and CDBABY.
Posted by MrJeff2000 at 8:27 AM