You can make it a good Friday, regardless of your faith.

Father Goose has released his new single, "Friday" and it's available for immediate download through iTunes.

Goose cuts a groove and guest performers (Elena Moon Park, Yami Bolo, and Itimo) join along. Father Goose calls himself the "King of the Dance Party" and he's set out to maintain that title, one song release at a time, this year.

I confess. Every now and then a children's musician crosses my desk with a long resumé who I've never heard about. That's the complexity of any genre but children's music in general. The majority of the performers do it for the music and for the kids. Fame and fortune do not magically land at the feet of every musician. And that's especially true when your audience truly believes the creatures in your songs, such as  "Willy the Wooly Mammoth," really exist. 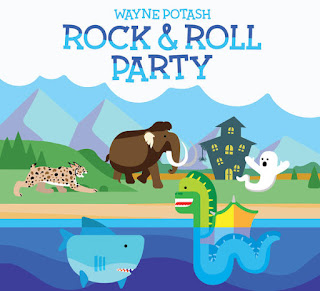 Wayne Potash fits that description and his new CD, ROCK AND ROLL PARTY, is 16 tracks that will entertain and amuse young listeners. This time out, Wayne has re-envisioned the Who's "Boris the Spider" and the Aerosmith blues classic "Train Kept A-Rollin" for the post-diaper set.

Wayne seeks to teach some lessons along the way. The message gets a little muddled if you stop and think too hard though. I remember Sigmund and the Sea Monsters on Saturday mornings. Is that the inspiration for "Clawzy the Sea Monster," who "never tells a lie"? Otherwise, it's just a way to end the chorus with a rhymable tag.

You won't exactly come away from ROCK AND ROLL PARTY with a new appreciation for children's music. Wayne is not reinventing the wheel. Here's found a niche and an appreciative Massachusetts audience and is looking to expand his base. You can visit his site for samples of his other CDs as well.