Dana Jumps and Jams With Juniors

Aah spring, when children's recording artists seek to release new music to integrate into their live shows. This year is no different and I've received a trove of new CDs that I'll be writing about over the next month or two. 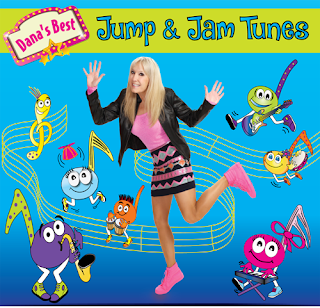 Starting at songs for basic listeners, Washington State's Dana Cohenour returns from a maternity break with her sixth album, DANA'S BEST JUMP & JAM TUNES. The 12 songs range from country to jazz to bluegrass. The tracks invoke animals ("Fish Tale" and "Barnyard Hoedown"), physical fitness ("Jump and Jive" and "Wiggle Workout"), and responsibilities ("Do My Part").

There's a tendency to shrug off performers who aim at the youngest among us. They aren't the most discerning critics. So Dana makes sure to lyrically target parents as well, as "Wiggle Workout" can attest...

Let’s take a breather, you know I’m older than you!
Workin’ out gets sweaty and maybe smelly, too!
But that’s OK, we’re getting healthy as can be
We eat things that are green, we even drink green tea!

An educator as well as a parent/performer, Dana "road-tested" her material on her Music Playground students and is now poised to entertain new audiences. By new, I mean children under the age of 7. But those kids have parents as well. Otherwise, what brung ya here!?! Dana now falls firmly into that camp as well. DANA'S BEST features a Nashville studio full of top session players. She's busting to get back to work, which means getting kids back up on their feet. Listen, you can do it 24x7 or enlist Dana and take off an hour early. Your call. She's waiting.

Here is the video for Dana's song, "Jump and Jive":