Eric Herman Blasts Off With Spaced-Out Comedy for Kids

If you've ever wanted to see a joke die a horrible death, tell it to a child. Because of their remarkably delicate built-in BS monitors, most kids respond to awful comedy like normal people act when they encounter bill collectors – smile awkwardly and back-pedal furiously.

The good news about Eric Herman's first comedy album for kids, THE INCREDIBLY SPACED-OUT ADVENTURES OF JUPITER JACKSON, is that it passes the BS monitor test. There was stuff that went over our kids' heads but they mostly enjoyed the sketches, ads, and end-of-CD songs. 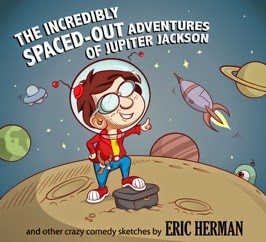 First the premise: Satellite station XYZPDQ (funded mostly by Healthy Grains, the makers of Super Sugary Sugar Flakes) is running its regular slate of programming. There's a news report ("ELECTRICAL STORM" has odd audio drop-outs that serve as an opportunity for listeners to devise MAD LIBS), a game show ("THE MATH GAME") which will confound your expectations, and an NPR-style talk show ("ARCHAEOLOGY HOUR") that goes off the rails from the first caller.

The title track is a sci-fi battle between Jupiter Jackson and his arch-nemesis, Max Mullet. In reality, it sounds like two kids running around a shopping mall. But that could just be my adult perspective. Jupiter and Max, incidentally, are voiced by Trout Fishing in America (Keith Grimwood and Ezra Idlet). Kindie musician Roger Day also surfaces in ELECTRICAL STORM in a cameo as the Mayor. I would be remiss if I didn't mention MONSTER LEAGUE BASEBALL and how it crams an endless array of puns and ghoulish jokes into one 10-minute routine. Invite Dracula and aliens to "Who's On First" and you wind up with MONSTER LEAGUE BASEBALL.

With more than 50 million YouTube views, Eric obviously has tapped into something primal that kids understand. While many children's musicians have attempted to work comedy into their recordings (ScribbleMonster comes to mind), Eric has chosen the obvious but riskier route of presenting the comedy UPFRONT (with a couple of comic songs as an encore). In that respect, JUPITER JACKSON is a success. Whether he can further cultivate his audience and develop "children's comedy recordings" into more than a niche category may be the most incredibly spaced-out adventure of 2015.

Here is the video for the sketch, MONSTER LEAGUE BASEBALL: