Aah, San Francisco. Land of liberal ideals, decent coffee, the Grateful Dead, Jefferson Airplane, and cable cars. Oh, and the Hipwaders, one of Ben's favorite children's music groups. Another concept that's trying to gain traction there is Rock Band Land, a collaborative program that offers a venue for elementary-age kids to express thoughts through original music and stories. 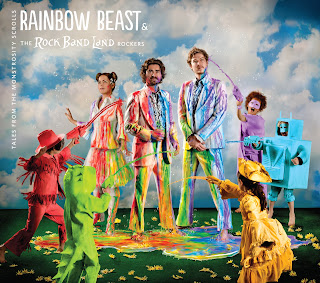 Have you ever met a kid who didn't feel somehow frustrated by their creative "process"? Rock Band Land seeks to alleviate their inhibitions, 90 minutes at a time. In addition to classes and performances, they solicit contributions from outside the Bay Area for their occasional podcasts (no new ones since September at last check).

The RBL trio (Marcus Stoesz, Brian Gorman, and Jen Aldrich) started in 2009 and have exceeded even their own expectations, I imagine. With all the music they've helped mine (150 songs to date), RBL have shaped a new CD, TALES FROM THE MONSTROSITY SCROLLS by Rainbow Beast and the Rock Band Land Rockers. Much like the thoughts of elementary school students, the themes are all over the place. In fact, our first casual listening experience was a mess. This is a concept album which requires more than playing it as background music for dinner. Although in an amusing coincidence, we were eating shrimp as they sang "Lola Versus the Giant Shrimp."

Did you ever wonder about what an early (Syd Barrett era) Pink Floyd album for kids would sound like? How about the Polyphonic Spree without all the constant vocal overplay? Shazam! Rainbow Beast is the creature for you. You'll need to hit the website for lyrics and prepare to do some 'splaining for the wee tots who can't read along.

On one level, there's profound goofiness with titles like "Fish Wife," "Hot Air Balloons Over Tapailo," and "Alone at Home With a Bus." But remember, these songs were written with the input of children. Actual children. And like I said, kids can be all over the place. Which makes for one trippy experience to begin with. Set the recording in San Francisco, turn up the dials to 11, and you get Rainbow Beast, a glorious cacophony.

TALES FROM THE MONSTROSITY SCROLLS will be available on February 11 from the band's Website, Amazon, CDBABY, iTunes, and Bandcamp.

Here is the video for their song, "The Truth About Polar Bears":