Science, Technology, Engineering, and Math (STEM) is one of those hot trending educational topics. Especially women in STEM. There are some kids who "get it" and other kids who need a gateway. To that ends comes KidzMusic and their new release, Kidz STEM Songs. 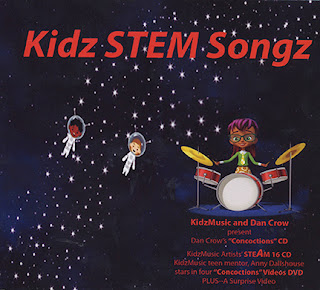 The packaging actually repurposes CONCOCTIONS, a 2016 EP by Dan Crow, karoake tracks to the same five songs, and a DVD with videos for those five songs. There's also a 16-track CD featuring repurposed science-related songs from a bevy of artists, including Lucky Diaz and the Family Jam Band, Danny Weinkauf and the Red Pants Band, Hap Palmer, and Roger Day.

Dan Crow sings very clearly about "Science Science Science" and "Technology" as fundamental underpinnings of the planet. "Franklin D. Dime and Abraham Penny" instructs kids that the word "change" can be a double entendre they can bank on. I initially mistook the name of the EP as "Connections," which would have been appropriate as well. CONCOCTIONS is all about tangibly helping create a future and that's what kids are all about. At least when they're not being stubborn. I noted in 2016 that while I prefer They Might Be Giants' song "Seven" to the one of the same name here, there's a fun and practical purpose to "You're An Engineer." There's more than one kind, you know, as I reminded my train-engaged youngster.

The "making science fun through music" CD runs the gamut with artists who have been recording children's music since almost the beginning of time (almost). My teen was stunned to hear a "new" Hap Palmer song after more than a decade. There were also a few pretty insufferable tunes that they've both aged out of, which were quickly skipped after the first play-through. But that comes with the territory – children's music isn't always parent-appreciated.

If I had one main quibble, it would be with the packaging itself. Ending words (or wordz) with a Z to make them seem edgy and hip is something that went out of style a long time ago. And using it twice in the three words of the title (KIDZ STERM SONGZ) makes it more of a faux pas. Plus the cover (see above) looks like the first draft of a cut-and-paste suggestion. It totally undercuts the value of the product. Bottom line, don't judge KIDZ STEM SONGZ by its cover. There's some good stuff going on; you just need to open the CD jacket.

KIDZ STEM SONGZ is available on May 4 from the KidzMusic website, Amazon, and CDBaby.

Here is the video for Dan Crow's song, "Technology":