Concept CDs can go either way. When everything works, you wind up with a masterpiece like The Who's rock opera, TOMMY. When nothing works, you get, well, the opposite of TOMMY. Come on, guys, work with me here. It's all a matter of personal taste and perception. Even John Lennon did an interview and badmouthed Sgt. Pepper. Even rarer is the conceptual kid's CD. A nifty recent example would be Recess Monkey's HOT AIR. 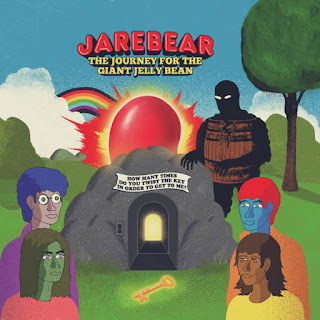 New to the scene is Austin, Texas garage band Jarebear, with their entry into the fray, THE JOURNEY FOR THE GIANT JELLY BEAN. Minus a press release or any substantive biographical info, what I can say is that Jarebear goes gently down that concept road, taking a right at the fork where King Crimson splits from Pater Gabriel-era Genesis.

GIANT JELLY BEAN follows a boy named Otis, who learns about a mythical giant jelly bean that's supposed to solve all the world's problems. He and his team go on a quest that turns into a voyage of self-discovery, naturally. I'm not giving away too much of the story with that information.

As with any concept CD, the sum is greater than the parts. And THE GIANT JELLY BEAN is certainly no exception. Out of context, the lyrics appear to be two parts The Wiggles, one part Spin Doctors:

We’re meeting new people, we’re trying new food
New courses of action are being pursued
The sky is so blue, the trees are so pretty
It’s really quite different from our dear old city
Here we go, Here we go
Here we go, so don’t be slow

If you've got a hankering for old-fashioned prog rock (look it up) and your kids are in the mood to engage their imaginations, THE GIANT JELLY BEAN could really make your scene, man. Jarebear has targeted its sights on a selective demographic. Doth thee wisheth to maketh the trek, perchance? Or does the idea just give you a mightieth headache? Check the samples on Bandcamp below and free your mind.

JOURNEY FOR THE GIANT JELLY BEAN is available from Jarebear's website, Burger Records, Bandcamp, Amazon, and iTunes.
Posted by MrJeff2000 at 7:26 AM