Junie B. Jones the Musical – CD for Girls and Boys

It's tough to get boys to read. Comic books used to stem the tide but they were overtaken by videogames more than a decade ago. Graphic novels hold only a fraction of the male audience that previously read Batman and Spider-Man. DIARY OF A WIMPY KID caused a sensation (and a slew of imitators) but my younger son Matt is not in that demographic yet. 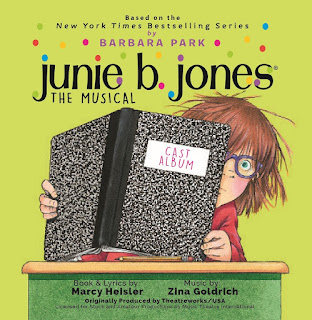 In the meantime, I was stunned when Matt expressed interest in the Junie B. Jones series of books. We were passed along a copy of the 17th book, where the character graduates from kindergarten. This was at the same time that he was moving up to first grade as well. With his birthday fast approaching, he asked for more books in the series. I see Matt advancing past the books at some point, but there are many more in the series – and now a live-action musical.

JUNIE B. JONES: THE MUSICAL CAST ALBUM, written by the team of Zina Goldrich and Marcy Heisler, is being released next month. The production is being performed around the country by different companies and a "junior" production for school kids is also in the works.

For the uninitiated, Junie B. Jones is a rambunctious first-grader (in line with an older Ramona Quimby). She has a mother and father, a baby brother, and a host of supporting friends and family members. The stories are simple – Junie becomes a first grader, must make new friends, and deals with having to get glasses. Author Barbara Park (and illustrator Denise Brunkus) allow Junie to explain her actions, even when she is clearly being manipulative, spiteful, or just plain wrong. And there is generally a happy resolution to every story.

JUNIE B. JONES THE MUSICAL tackles several storylines from the first grade books, including a kickball tournament. Kids theater productions generally run one hour and the CD is 30 minutes, so newcomers may want to read a few of the books or see the stage show. I was able to fill in the blanks in my head, but younger listeners may need another medium to accomplish that task.

The Goldrich and Heisler production is friendly and breezy and the vocals (principally Lori Casteel as Junie) are winning and earnest, with nary a hint of world-weariness or sarcasm. I could tell that Matt was enjoying the CD when we left the car and he continued to sing the opening track, "Top Secret Personal Beeswax." His older brother also sang along, but he just likes to provide harmony.

We're a musically-based family and I appreciate the synergy between theater and music. When the primary mechanism is reading, it's a pleasant bonus. Literacy is a key component of Matt's curriculum. Usually music is an incentive to get him to read. In the case of JUNIE B. JONES, he's already into the books and the musical is an added surprise. I'll be on the lookout for a production in our area in 2017.

JUNIE B. JONES THE MUSICAL CAST ALBUM will be available on January 13 from Amazon and other etailers. Follow the Facebook page or Ticketmaster to find out where the production is being performed.
Posted by MrJeff2000 at 8:42 AM