Families are all about traditions.

Dan Zanes and his extended family of musical friends will return to City Winery this Sunday, December 4 (11 am) for his 6th Annual Dan Zanes & Friends Holiday Sing-A-Long. This year's edition features special guests and a multicultural selection of holiday songs. 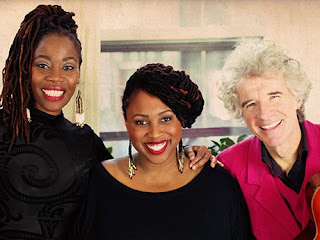 During his tenure in children's music, Dan has constantly redefined his role. He's been called a folkie, an archivist, and a storyteller. If I had to describe Dan Zanes as a musician, I wouldn't call him a self-made man, I'd call him a handmade man. Now he's rebranded himself as "21st Century All Ages Music," as per his website. Dan's world is a house party, just don't expect to hear "House Party" at every show.

The Holiday Sing-A-Long is a sensory friendly show, with a comfortable environment for all children. Much thought has been given to those with special needs, meaning there will be a manageable degree of stimuli and a relaxed, welcoming atmosphere.

The holidays are the perfect time to introduce a child to live music – they are bombarded with traditional favorites as well as contemporary remixes. Why not take the opportunity and open a door to a world of possibilities?

People who don't feel comfortable singing or dancing need not worry about being coerced. And all families will receive songbooks when they arrive, so they may participate in the concert.

Here's a lead I thought I'd never write:

The Lincoln Financial Group ha underwritten an audio anthology for children, WE STOOD UP: REFLECTIONS ON THE CIVIL RIGHTS MOVEMENT. The album is free for download for teachers, libraries, and community groups. And that's exactly where it belongs. This is an earnest collection of spoken word histories and recollections on the battle for desegregation in the United States. Maya Angelou's great-granddaughter Caylin Johnson does a reading of "Caged Bird." The late Julian Bond makes his points, as does Congressman John Lewis.

Is this a perfect holiday gift. No. Is it a stocking stuffer? No. But Lincoln Financial believes (rightly so) that these are important stories, songs, and poems to share with new generations. And this CD, released as part of its Lincoln's Legacy initiative, is a linchpin during the 150th anniversary of the Emancipation Proclamation and the 13th Amendment.

WE STOOD UP: REFLECTIONS ON THE CIVIL RIGHTS MOVEMENT is available for download through this link.
Posted by MrJeff2000 at 7:44 AM