Part of the appeal of children's music is the "I can do that!" aspect. Whenever you see a toddler strum a toy guitar, bang on an oatmeal box, or shake a tambourine, they are actively engaged and participating in the experience. My five-year-old loves nothing more than to sit, stone-faced, during a live concert of his favorite musicians (Recess Monkey) then go home and recreate the show, song-for-song, in front of a tinny microphone with a cheap, broken plastic guitar. 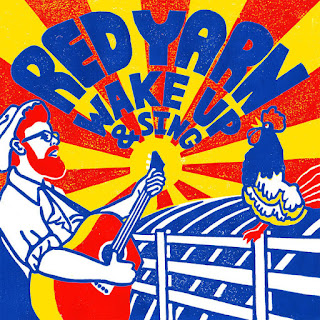 There's nothing cheap, broken, or plastic about Red Yarn (aka Andy Furgeson). Since committing to his role as an American roots musician, Andy has devoted his attention to reviving traditional folk music, following in the legendary stylistic footsteps of Pete Seeger and Woody Guthrie. For his third CD, WAKE UP & SING, Andy and über-producer Dean Jones broach Guthrie's iconic "Wake Up," accompanied by Morgan Taylor (Gustafer Yellowgold) as well as a trove of rediscovered numbers, such as "Fourth Day of July," "Molly Cottontail," and "Hound Dog Song." Portland mainstay Mo Phillips also drops by for "Clap Your Hands" (not the They Might Be Giants song).

I want to specifically stress the "light bulb" moment that youngsters have in regards to certain performers. While my kids may have enjoyed the Wiggles, in no way did they ever feel they could emulate that style. But when my son sings "I Had a Rooster" and mimics Red Yarn's vocals, I can tell that the compact fluorescent switch has been flipped – this is something my kid can do, and that's a testament to Furgeson's simplicity and folkie integrity. Kudos also to Red Yarn bandmate Jed Greenberg (bass and fiddle) and guest cellist Jane Scarpantoni for their contributions to the "cause."

Andy is not seeking to make a career from just covering dustbowl classics. He sprinkles in contemporary and catchy originals. The first song and accompanying video, "Beautiful Day," demonstrate a clear example of the musical and puppetry talents that Andy uses to hook his target audience. Here is "Red Yarn," not precisely Andy, with his puppet family and their daily fun activities. If you're under seven years old, how can you look away?

Andy (and wife/vocalist Jessie Eller-Isaacs) close out WAKE UP & SING with a charming pair of new tunes ("Welcome to the World" and "Sleepy Song") informally dedicated to their young son. It's a commonality among artists, especially kindie peeps (for example, Harmonica Pocket and Chibi Kodama). It's a personal touch that speaks to their children while speaking to an audience of children and the children of those who first heard this genre of American songs. It's enough to make a kid grab a kazoo, or an oatmeal box, or, well you get the idea.

WAKE UP & SING is available on April 22 from Red Yarn's website, Amazon, Bandcamp, and iTunes.

Here is the new video for "Beautiful Day" from WAKE UP & SING, directed by Laki Karavias: