More Than "One" Reason to Hear Aaron Nigel Smith

Kids like what they like, just like adults. Different kids like different things from other kids, just like adults. Just because you like hard rock doesn't mean your kids are going to the Slipknot concert with you. But the point of exposing your kids to genres that you like is that it increases the likelihood that their musical tastes will wind up in sync with yours. 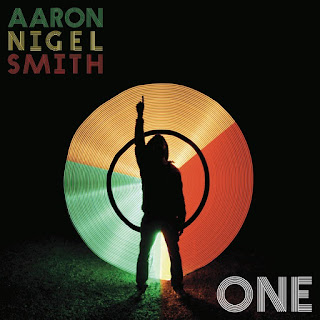 We've taken the kids to a plethora of musical events, including introductions to classical music. The initial entree into reggae came through Father Goose, who would join Dan Zanes and Friends on stage during the final sections of those concerts. The audiences would come to their feet and dance and sing along. It was a change of pace from the mostly folkie material and dusty "songbook" stylings. Sad to say, we never followed up with a full show by a similar performer – Aaron Nigel Smith.

Which is not to say that Aaron Nigel Smith has made it easy for us. Frustratingly, he has remained insatiably accessible with his music and local performance schedule, including shows at Symphony Space. His latest CD, ONE, remains as effervescent as ever, a mix of traditional junior reggae and rhythms. From the familiar opening shout of Father Goose, it was clear we were in the right place – "Dance to the Reggae Rhythm" puts young listeners in the right frame of mind to accept some friendly beats. By the time we got to "Natty Dreadlocks," Matt (5) began to sing along with the chorus, "Market woman, on her way to market." In fact, he sang along for the next week, whether or not the CD was playing.

Aaron's work with the 1 World Chorus continues, as the kids from Portland, Los Angeles, New York, Kenya, and Jamaica provide youth vocals on ONE. Founded by Aaron in 2006 in Los Angeles, 1 World Chorus demonstrates and promotes unity through the performing arts, with an emphasis on the transformative experience of choral singing. The program has expanded to six locations in three countries on two continents. Adult guest artists include Ernie Smith, Ras I, Dubtonic Kru, and Cathy Fink (of Cathy & Marcy fame). Despite the wide expanse of ages and talents, the focus remains on unifying values through universal themes – "Seasons" points out that no matter where you live, there are four seasons. "Take Time in Life" urges a mix of amped-up fun as well as relaxed downtime, with family. "Hammer" is a melodic take on the Pete Seeger classic. For a generation that may never have heard the folkie original, it's as good an entry point as you could hope for.

There are innumerable puns and plays on words that could be used to emphasize the positive values and zesty funk of ONE. Aaron Nigel Smith delivers a full portion of entertainment with a small side order of education. For a father and writer who visibly winces at the phrase "world music," that's a major accomplishment for ONE musician like Aaron.

ONE is available on April 22 from Aaron's website, Amazon, and iTunes.