After recording and releasing one song every month for more than a year, it would have been easy for Mista Cookie Jar & the Chocolate Chips to just compile their offerings onto a quick-pressed CD. It would have been easy, but it wouldn't have sat right with Mr. Jar (a.k.a. CJ Pizarro). 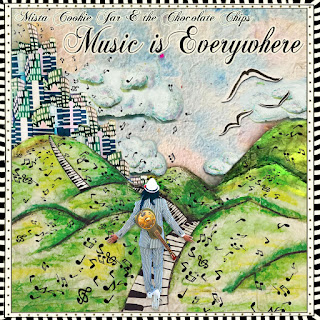 Instead, he spent more than six months going back to the drawing board – many of the tunes do make the new CD, MUSIC IS EVERYWHERE. But there are new tracks as well, featuring surf music, rock and roll, big band swing, Motown, as well as CJ's upbeat raps and rhythms. "Young at Heart" is a modern take on Bob Dylan's "Forever Young." If Dan Zanes relocated to the West Coast, he would be proud to write a song like "Hold On to Your Dreams," co-written and performed by Tembra Campbell:

CJ never loses track of his primary audience – young kids who need a diverse range of musical influences to cultivate their own tastes. When I was a kid (let's not go there for too long), I had school trips to the Philharmonic as well as ballet and theatrical productions. My younger son is getting some of that now but we had to hunt for the Little Orchestra's Lollipops concert series 10 years ago to give our older son a taste of classical music. Thankfully that program thrives to this day. In the meantime, I don't hear a lot of bluegrass and ska on a Selena Gomez or 5 Seconds of Summer CD. But Mista Cookie Jar stretches the boundaries of children's music to make those genres acceptable, palatable, and contemporary.

"Music Is Everywhere" asks kids to live in the moment and wait for that one perfect note in concert. Yes, children's music is the gateway genre that acts as an entree to live performance and interaction with professional artists. As such, CJ emphasizes that there's no wrong way to listen to music, as long as you're excited by the experience. And if the music galvanizes your children enough to seek out videos, concert clips, and perhaps ask if that artist is coming to your area, all the better. MUSIC IS EVERYWHERE started as an ambitious experiment. Although the CD has dropped through numerous outlets, the experiment continues with every new listening.

Here is the video for the new song, "Young at Heart":