All the World's A Song for Frances England

Frances England falls smack in the middle of the Venn Diagram of children's musicians/multimedia personnel. Originally a recording artist via accident (a home-recorded CD reached the ears of people who knew people in the biz), she has morphed into the accidental tourist.The role she's well-played for a decade is not done; rather, England has added another brush to her palette. 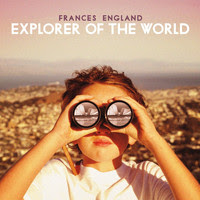 Her new CD, EXPLORER OF THE WORLD, delves into community and awareness of ones physical surroundings. Many children's musicians create busywork around their music – a hopping song, a wave your arms song, etc. England is more interested with interactivity. The CD was borne from counting people going through their day-to-day lives while wrapped up in their electronic cocoons. Is this what kids should aspire to become when they get older, she wondered. Or is this another avenue for education and musical enlightening?

The two-year process involved more than words and music. England shot innumerable photos in San Francisco and the surrounding area, turning those into family activity books as well. "So much to discover, so much to do," she sings on the album's title track.

EXPLORER OF THE WORLD mines the spirit of San Francisco and delivers a love letter through "My Street," "City of Hills," and "City Don't Sleep," featuring ambient street sounds. Capturing audio is one thing, assembling and decoding it is another. For that task, England brought in two men who had never worked together – über-producer Dean Jones and Not Ready for Playtime instrumentalist Dave Winer. The pairing works, as the Burt Bacharach-esque "See What You Can See" rubs shoulders with the percolated drumsticks and horns of "City Don't Sleep." England goes completely meta on "All The Things I Found." During the song, she sings about documenting her process. But it's a song about things she found that constituted the documenting.

Gustafer Yellowgold's Morgan Taylor drops in for "City of Hills," a digital Hallmark card merged with a Google Map laundry list of tourist attractions. "Ballad For a Beatboxer" finds a sweet showcase for England's former nonprofit colleague, Carlos Aguirre. "Sweet" is the all-encompassing word for England's traveling vision on EXPLORER OF THE WORLD. Your eyes may start to tear at the end of the closing tune "Little By Little," but it's not from the dirt in the street, it's from the wind-swept sand high in the hills as you overlook the ocean and a breathtaking city. And a brand-new art and activity volume to ensnare the burgeoning traveler in all youthful adventure-seekers.

EXPLORER OF THE WORLD is available April 1 from Frances England's website, Amazon, and iTunes.

Here is the video for "City Don't Sleep":