Sunshine Collective and Mil's Trills are releasing new CDs that hope to resolve the musical conundrum, can children's music be relentlessly upbeat without being redundant? Sunshine Collective delivers a California power-pop message with verve and smiles. Mil's Trills represents the East Coast with a public tip of the hat from first lady Michelle Obama's "Songs for a Healthier America" program. 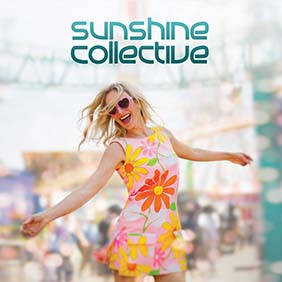 Stephanie Richards and Brian Arbuckle take their real-life collaboration to the next level with their music. Lightly evangelistic (the couple have released a pair of Christmas singles), Sunshine Collective are emphatic about warmth and togetherness. The new CD, UP TO SOMETHING GOOD, radiates goodness through tracks like "I Love You," "Misplaced Love," and "Love Is the Way." And if you're still feeling down, remember that life is about journeys, as instructed by "The Ride."

Sunshine Collective refuses to label themselves as children's music, insisting that their CDs are for families and listeners of all ages. UP TO SOMETHING GOOD delivers a catchy, punchy, earnest feel-good playlist of tunes. Kids won't feel they're being sung down to and adults shouldn't wonder if Richards and Arbuckle are preaching the wrong message. Sunshine Collective sees nothing wrong with leaving yourself exposed in "The Open" and experiencing what life has to offer. And they're presenting 11 songs on their second CD as evidence of their theory.

UP TO SOMETHING GOOD is available on September 16 on the band's website, iTunes, and CDBABY.

Here is the video for Sunshine Collective's song "Together - Busking in NYC":

Amelia Robinson (Mil of Mil's Trills) is emphatic that childhood is tough. Once in a while, everybody needs somebody to offer some assistance. NOW THAT WE'RE FRIENDS is about as self-explanatory a title as you will ever hear. The CD stresses life lessons and acceptance, although I caution parents that not every child needs to be told they are "Special." Every child is unique, from my experience. "Yay! You Are You!" works a little better for me. 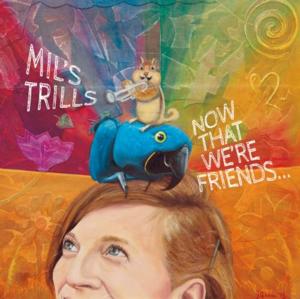 A global traveler, Robinson percolated her voyages and brought them back to New York, where they are regularly distilled as an interactive performance series under the nom de plume Mil's Trills. Kindie auteur Dean Jones finds himself surrounded by a host of talented musicians such as bassist Rob Jost, guitarist Thad DeBrock, and woodwind player Steve Elson.

Mil's positivity paints a broad spectrum of musical genres. The reggae beat of "Everybody's Got a Body" devolves into girl-group harmonies by the end, however the Caribbean influence pervades the entirety of the next track, "Just a Little Bit." And there's a twinge of sadness in "When You're Gone":

The underlying message of Mil's CD theme is summarized in the closing anthem, "Be Kind" – the world may be a big place but every life revolves around the constant constellation of your family and friendships. It's a solemn counterpart to the rousing opener, "Say Hey!" And in the end, neither Sunshine Collective nor Mil's Trills are repetitively inspirational. Both CDs seek to instill (not indoctrinate) and engage their audiences with youthful exuberance. And you can never have enough of that rare and exalted commodity.

NOW THAT WE'RE FRIENDS will be available on September 23 from Mil's Trills website, Amazon, CDBABY, Bandcamp, and iTunes.

Here is a video of Mil's Trills live at the BAMkids Film Festival: