Dear Mr. TeeVee,
Call me old-fashioned but I love these singing competitions. I seem to recall a show hosted by hunky Nick Lachey. What happened to the program?
– Miriam Lincoln, Clarion, WI

Well, Miriam, your memory isn't deceiving you. "Hunky" Nick hosted THE SING-OFF until a tragic studio accident got the show cancelled. NBC isn't talking, but I'd bet that after all the litigation is finished, the competition you love will return to the airwaves.

Dear Mr. TeeVee,
There is a wonderful character actor named Ed Lauter. He appeared on an episode of THE OFFICE. Where have I seen him before and what is he doing now?
– Robert Jackson, Seattle, WA

Seattle may be tragically hip but Ed Lauter is tragically deceased, Robert. The veteran performer (from Long Beach, NY) has a resume of film credits that stretches on and on, including more than 200 movies! He is certainly one actor who can rest in peace!

Dear Mr. TeeVee,
When ABC cancelled COP ROCK, it left so many unanswered questions. Will Mayor Plank get re-elected? What happens to Detective McIntire? Is Officer Campo ever going to come out of the closet? Do you know what the writers were planning on doing if the show was renewed for a second season? 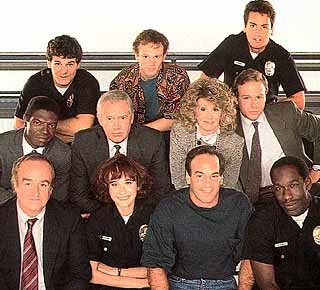 You're in luck, Leslie. We called writer John Romano and he gave us these quick notes: "Mayor Plank served the remainder of her term and went into teaching. Detective McIntire moved to Chicago, went to work in a hospital, and lost his arm in a freak helicopter accident. Officer Campo lives in a committed relationship with a transgender Muslim man named Yusef." Whew! That's a lot to take in!
Posted by MrJeff2000 at 8:55 AM