There's got to be something in the water.

First Justin Roberts records a CD of lullabies. Then Caspar Babypants announces that his next recording will be lullabies. And now, DidiPop (Deborah Poppink) has released BUNNY IN THE MOON, her collection of original childrens night-time songs. 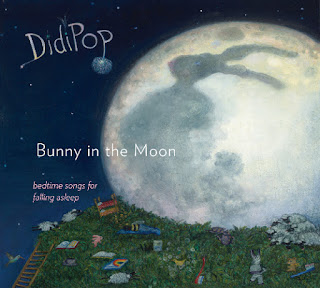 Los Angeles-based musician/music instructor Deborah Poppink headed into childrens' music after the birth of her two daughters (both of whom appear on this CD). The motivation for the recording came from her family's evening routine, which involves letting the kids naturally "wind down" until they are relaxed enough to go to bed, if not immediately to sleep.

BUNNY's Act One moves children through the bedtime routines – "Bathtime," "My Old Pajamas," "Brush Brush," "I Love You Mommy," and the response, "Good Night My Love."

Act Two gently lifts listeners into bed, for a series of acoustic and classically-twinged tunes with influences of Bach, Chopin, and Mozart. The title track assures youngsters that their parents are always with them, even when they can't see them. For instance, in the moon or the sky:

BUNNY IN THE MOON is the perfect antidote to every post-dinner period when adults are two steps ahead of children (i.e., nearly asleep) and need to flip the script. The innocent question, "Want to hear some music?" now has a delightfully narcoleptic solution. And you never thought that was possible, did you?

BUNNY IN THE MOON is available from DidiPop's website, Amazon, CDBABY, and iTunes.

Here is the video for her song, "The Cool Alphabet Song":