Rocknoceros: The Line Between Silly and Smart

Songs About the Colonel and His Animal Friends

Twenty years of friendship can do strange things to people. For Rocknoceros, it meant the time had come for a concept album about friendship. Coach Cotton, Williebob, and Boogie Woogie Bennie have been fixtures on the Washington, DC children's music scene since 2005. After three acclaimed CDs, the trio is attempting something more ambitious: a CD with a companion book.

COLONEL PURPLE TURTLE inhabits Soggy Bog with his friends, including Harry Elefante, Rocky the Dog, Truman Coyote, and Pirate Harvey. All of them get their own song and we learn about them and their place in Soggy Bog. 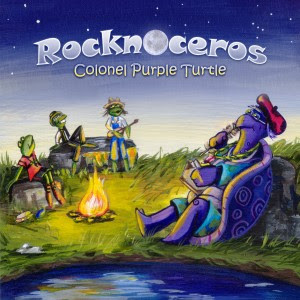 The CD straddles the fine line between silly and smart. The title character "wears a violet toupee under his magenta beret." But there's also a track called "Echolocation" that explains animals use sonar to emit calls out to the environment and listen to the echoes of those calls that return from various objects near them.

COLONEL PURPLE TURTLE shows animals living in harmony, aware that their contributions are important and impactful. "Conservation" covers the affects of wasting water and preserving our natural resources. "Fire of the Sun" urges listeners to use sunscreen for protection because "despite harmful UV rays, we'd not survive without its blaze."

The CD succeeds as a stand alone, without the book. If this is your first exposure to Rocknoceros, you'll feel bemused as your children are amused. COLONEL PURPLE TURTLE is available at retail outlets on Tuesday, September 13.
Posted by MrJeff2000 at 8:10 AM