The family band concept has existed forever. Most recently, the Oot 'n Oots feature four brothers and one of their daughters. Keeping in the sibling spirit is the brother and sister team The Green Orbs. Eddie RosenBerg III and Heather Hirshfield first decided to collaborate musically in 2015 for the YouTube Audio Library. Three years (and 50 songs) later, the duo have released their debut CD, THUMB WRESTLING CHAMPIONS. 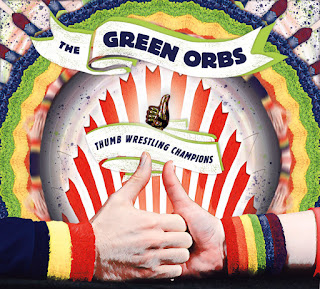 While every family has their resident goofball, the Green Orbs divide the wackiness evenly. That way, Eddie can sing "Soup is the best food in the world" and Heather can belt the '60s Romper Room meets Shindig! romp, "The Suction Cup Shuffle."

There are a host of characters in the mix as well, including "Doug the Bug," "Ruby the Tooth Fairy," and "The Duck of Whistleburg." All teach some lesson, such as "don't litter." But there's enough silliness to counter-balance any lecturing, such as the song in search of a Broadway musical, "Twelve Steps to Eating Your Veggies":

Step 3
Hold your nose …what you can’t smell, you cannot taste
Step 4
Hum your favorite tune… and your veggies will vanish without a trace

While a genial, upbeat tune packed with a horn section, "A Flower in My Shower" makes the listener feel a little skeevy about the hygiene of the family whose bathroom has been invaded by plant life. Yes, it's an allegory about appreciating nature. However when you grow up with three younger brothers, it would not have a been a surprise to find sweat socks cultivating potatoes.

Looking at their bio, Ed seems to be bursting at the seams with his musical pursuits. Heather, while ensconced in suburban Marlton, New Jersey, has refined and expanded her instrumentation to cover piano, ukelele, trumpet, and baritone horn. Their mind-melded sensitivities give the Green Orbs a confident and friendly aura. THUMB WRESTLING CHAMPIONS lets kids witness the spectacle of a mummy grappling with a pickle. At the end of the day, isn't that what children's music is supposed to do best?

Here is the video for their song, "The Suction Cup Shuffle":