Hold the Sauce, Not Applause, for Spaghetti Eddie

Every now and then a children's music act goes completely under the radar, generally acknowledged inside their region of the country but otherwise an unknown entity. That's the case with Brendan Parker, who has just released the fifth volume of SPAGHETTI EDDIE! AND OTHER CHILDREN'S SONGS. 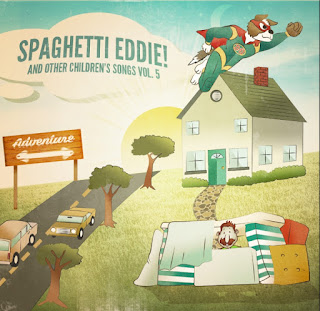 The concept is fairly simple – the first CD introduced Spaghetti Eddie, but it wasn't a song cycle. Indeed, it was merely a clever collection of amiable tunes for tykes and early education students. Over time, Parker and company have added characters but the formula has remained charmingly and disarmingly consistent.

Perhaps the best-kept secret in Oklahoma City (unless there's some Twin Peaks craziness that hasn't broken loose yet), Spaghetti Eddie falls into that fine divide between the Sugar-Free Allstars and Mo Phillips – a solid foundation of wordplay and musicality that doesn't talk down to kids or make their parents want to "disappear" the CDs.

Brendan and bandmate Erick Alexander don't tackle any overtly heavy subject material (although that may happen down the road). Spaghetti Eddie instead mines the minutia of everyday kid life, such as "Wonder Where Everybody's Going," " Let's Go Explore," and "Forts," with the refrain:

Perhaps it's time for Spaghetti Eddie to get cooking and prepare for wider exposure. The first time I heard of them was when Parker contacted me directly (a common story). With more content giving their backstory on the Website or Facebook, and a little friendly radio play on podcasts, Spotify, Pandora, or SiriusXM Kids Place Live, Spaghetti Eddie could add some meatballs to their saucy selections.

SPAGHETTI EDDIE! AND OTHER CHILDREN’S SONGS VOLUME 5 is available from their website, Soundcloud, iTunes, and Amazon.

Here is the video for the song "Kitty Cat Town":