When you think about some acts (think the Verve Pipe), if you don't know better you wouldn't think they were producing quality children's music in addition to being "day job" rockers. For other musicians such as Lisa Loeb, however, the process feels very much like a natural career progression. 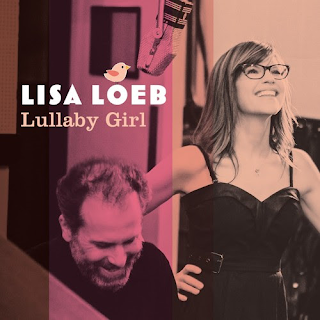 Rather than give a whole career recap (that's what Wikipedia is for), I'll concentrate on the kids phase, which started incidentally a decade ago and has come full-circle to be a major component of her recording career, from CAMP LISA to NURSERY RHYME PARADE! to her latest CD, LULLABY GIRL (an Amazon Music exclusive).

A collection of 13 tracks both new and revisited, LULLABY GIRL takes the familiar ("Dream a Little Dream," "Rainbow Connection," and "All the Pretty Little Horses") and mixes with some new choices (Fleetwood Mac's "Don't Stop" and The Five Stairstep's "O-o-h Child," my favorite on the CD). Loeb also adds two new compositions, "Close Your Eyes" and the title track, which serve as hors d'oeuvres for the rest of the tunes.

Loeb traverses the easy-listening landscape for her selections, from the Disney songbook (a wistful take on "A Dream is a Wish Your Heart Makes") to Burt Bacharach and Hal David (slowing down the classic "What the World Needs Now"). And the LiteFM setting turns "Inch Worm" into a full-on cocktail lounge number. She is served better on the more unconventional (for kids) tracks, as I've lost track of the number of cover versions of "Rainbow Connection."

Ultimately, there's always a place for an eclectic bedtime collection. I was constantly looking for something to swap out with Brahms and Shawn Colvin when Ben was tossing and turning. The road to Slumber Town is paved with good intentions. With LULLABY GIRL, Lisa Loeb is providing a new exit ramp, courtesy of Amazon Music.

Here is the video for "You Can Count on Me (Lullaby)," which is NOT on this C, ironically.