Hullabaloo: I CHEW Is Mind Food for Kids

Off the top of my head, three of the most prolific children's music performers/acts in the past decade are Recess Monkey, Caspar Babypants, and Hullabaloo. This year will prove a watershed moment for all three of the aforementioned – Chris Ballew (Babypants) releases his 11th CD in August. Hullabaloo releases its 12th CD, I CHEW, on February 26. And the Monkey Men's next CD will make a baker's dozen (that's 13, for you butchers and candlestick makers). 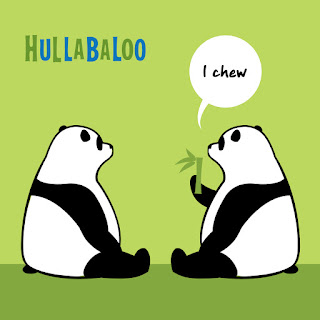 Steve Denyes and Brendan Kremer met in kindergarten. Their love of music (and strong friendship) has deepened and evolved into one of the kindie movement's legendary tales. Hullabaloo are the undisputed countrified descendants of Trout Fishing In America, a duo with innocently funny intentions. I CHEW is the result of a 2015 project to write 21 songs in 21 days last winter. We're not talking epics – the 16 selected tracks clock in at 22 minutes. That's a
ukelele, banjo, and mandolin version of "The Fast and the Furious" for your preschoolers.

Recess Monkey started a penguin motif with 2015's HOT AIR. Hullabaloo continues the trend with "Senator John Arthur Clydesdale III," about a penguin running for President, a bird of the people. The longest track, "I Wear Pink," also features a bevy of guest stars including Red Yarn, Papa Crow, Laura Doherty, Peter Alsop, Dean Jones, Jim Cosgrove, Randy Kaplan, and Mista Cookie Jar. It's a happy-go-lucky true story from Steve's childhood, which featured hand-me-downs from older sisters and doing your own thing. In a similar vein is "Flowers On My Shirt":

Together we can change the world and I will do my part
With flowers on my shirt and love inside my heart.

Much like Uncle Rock (Robert Burke Warren) is country by way of upstate New York, Hullabaloo is country by way of San Diego. We're not talking Eagles/three-part harmony southern rock, we're talking about Johnny Cash, straight-forward, straight-talking, milk-drinking melodies. Two people can certainly generate a lot of sound – just ask the Sugar-Free All-Stars. But it takes truly talented duos to craft a consistently enduring and identifiable product. With a pair of grazing pandas on its cover, I CHEW gives you music to ponder. And who isn't fond of pandas?

I CHEW is available on February 26 from the band's website, Amazon, iTunes, and CDBABY.

The newest instructional video (!) from the band is for the CD's song, "You Are Loved," featuring American sign language: