Many people still blame Yoko Ono for "breaking up the Beatles," when in fact Paul McCartney was the first one to leave. But just imagine if John Lennon had left the group and been replaced by someone else. Remember, the Yardbirds replaced Eric Clapton with Jeff Beck and went on their merry way. 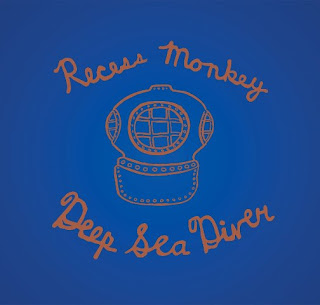 Last October, Recess Monkey drummer Daron Henry announced that he was leaving the popular children's music trio "to explore new adventures with my wife and family." Sound familiar? I don't want to paint Daron's wife as the kindie equivalent of Yoko Ono, but this is the group that named one of their earliest CDs TABBY ROAD as a tribute to the Beatles. The press release even refers to their newest release as the "blue album"!

Then again, the Beatles were a quartet and Recess Monkey is merely a trio. There's already an example of a famous three-man act that lost one performer and kept going for decades – the Three Stooges! After Curly suffered a stroke, the boys brought back Shemp Howard, then Joe Besser, and ultimately Joe DeRita. Okay, it's a stretch. But Recess Monkey (with original members Jack Forman and Drew Holloway ) has always delivered lots of laughs – almost as much fun as a barrel of monkeys.

Recess Monkey's latest CD, DEEP SEA DIVER, features new drummer Korum "Shemp" Bischoff. It's a fun collection of tunes that continues the band's progression into the realm of conceptual material (thankfully not world music). The songs have a nautical thrust, from the opener, "Tambourine Submarine" through "Choral Reef" and "Seagull."

"Fish Sticks" recounts the story of an underwater drummer who can play any form of music with his drum sticks. And "Shrimp" reminds height-deficient children that they retain certain advantages over their taller brethren:

But did you ever think about the things a shrimp can do?
Like sneak under the rail when you're at the zoo?
Playin' hide and seek they won't see you
Cause your body's even shorter than Pikachu

DEEP SEA DIVER is part one of a 2013 theme set. The CD ends with the haunting "Stranded." Ostensively about a best friend moving away, it sets the stage for DESERT ISLAND DISC, coming this fall. The followup imagines Recess Monkey after being set adrift on their own for four months. Hmm...depending on the food options, they could realistically come back as a duo.

It's thrilling to hear a band like Recess Monkey push themselves into new territory and not simply repeat their past successes. This is especially difficult since its "target audience" ages out of the demographic every 4-5 years, replaced by a new crop of eager ears.

Guest performers on DEEP SEA DIVER include producer Johnny Bregar, the ubiquitous Dean Jones (Dog on Fleas), and trumpeter Tom Baisden (The Not-Its). The list of plaudits and accolades for the band goes on and on. Perhaps it was the weight of expectations that drove the band to their new direction. If so, chalk it up as as good thing.

The year 2013 finds Recess Monkey heading in a new direction and they sound rested and energetic. They use the aquatic theme to reach some clever ends. "Up Periscope" is the terminology of a child locating a new friend in his classroom. "Tattoo Me" discusses the (hopefully) transient nature of artwork applied to arms and other extremities. Take the plunge with DEEP SEA DIVER and set sail for some musical hijinks. And look forward to the band moving even further into its future later this year.

DEEP SEA DIVER is available on Tuesday, June 18 from the band's website, Amazon, CDBABY, iTunes, and many other retailers.

Here is the video for "The Dancing Bear," from last year's IN TENTS CD: