This Cat Can Sing

For instance, ice cream. One spoonful? Not enough. A full serving? Paradise. Two servings with whipped cream? A stomach ache.

Cat Doorman's first CD, SONGBOOK, won't give you a stomach ache (how's that for a ringing endorsement? Put that on the sleeve sticker!!!). But you may find yourself hitting pause after 4-5 songs, as I did. More on that in a minute. 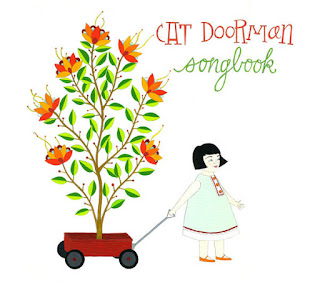 Raised in SoCal, Cat (nee Julianna Bright) has landed in Portland as an independent artist whose work with gouache, water colors, and ink have appeared on album covers, periodicals, and in galleries around the country. SONGBOOK is a collaboration with Night & Day Studios, creators of iPhone and iPad apps for the arts, education, and entertainment. As such, the gentle, countrified  "Little Red Wagon" has an accompanying app (coming soon).

Cat is an accomplished graphic designer. The artwork in the 18-page booklet that accompanies the CD is two steps above your average liner notes with spot illustrations. Possibly the most impressive packaging since Zak Morgan's BARBER OF THE BEASTS CD.

The Portland collective appears to be very different from the Seattle collective (Harmonica Pocket, Recess Monkey). Cat recorded with an array of very talented musicians (click through to read about them all). People who fear the hipster aura of Portland may roll their eyes at the decision to cover Syd Barrett's "Effervescing Elephant." But it's one of Barrett's less psychedelic and more whimsical tunes and is not out of place on a children's music album.

The piano-based "Madame Claire" give me an idea of what a Tori Amos kid's CD would sound like. "Let's Get Dressed Up" sweetly describes the pleasures of spending time going through the proverbial steamer trunk of "old people's" clothing. If you want to rock out with Cat, you get the closest with "Yeah":

I know a girl named Scout and she knows what it's about.
It's all about a giggle and a twirl.
I know a kid named Evie and her moves are really heavy
and her legs are always kicking like a rabbit.
She says, "Yeah!"

The press material describes Cat's sound as "songs that would sound at home on any alternative radio playlist." Except I'm playing the CD for kids. When we used SONGBOOK as background for dinner, it didn't get the "be quiet, I'm listening" vibe that Preschool of Rock received. Instead, the kids treated SONGBOOK like SiriusXM's Coffee House channel and basically chatted over it. Which is why I stopped it after five songs and heard the rest later, during playtime.

SONGBOOK is a thoroughly pleasant assemblage of tunes with a delightful booklet you can leaf through and read along to your children as the songs play. Just take my lead and do it in spurts. There's nothing wrong with knowing the best serving size – that's what prevents stomach aches.

SONGBOOK is available later this month through Cat Doorman's website, Amazon, CDBABY, and iTunes.
Posted by MrJeff2000 at 8:51 AM