A Southern Regional Edition of Ralph?

And now the South. Children's music is being made all over the country (and around the globe). Florida-based Nick Deysher (aka In the Nick of Time) is Miami's version of Ralph Covert (Ralph's World). Nick has released his fifth studio CD, MAKING SILLY FACES.

A preschool music specialist and afterschool teacher for 4-7 year-olds, Nick certainly knows his youthful audience. His experience teaching students privately through age 75 gives him additional insight into musical tastes of all ranges. "Making children's music has been a natural thing for me because it's a lot like teaching, and I've been teaching - as a camp counselor, babysitter, music instructor, preschool teacher - since I was a kid myself," Nick says. 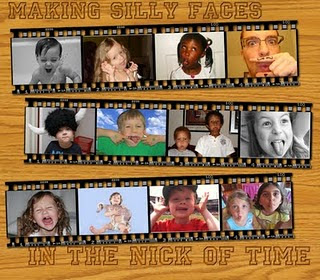 MAKING SILLY FACES reaches back to the themes of childhood - playing freely, relaxing, having fun, interacting with friends, and enjoying music. Every now and then, the real world sneaks in. "It's Easy Being Green" evokes recycling and ecology, while playing off the more famous similarly-titled song. And some kid's BS detectors might go off during a song called "I Tried It, I Liked It!"

There is not that much "Florida" or "Southern" specific content. Nick does mention in "Abajo/Arriba" that he has not learned many Spanish words in six years in South Florida. You would think he would try to include a song about maybe the Everglades or another state landmark if he's attempting to "go national."

I'm not saying that Ralph Covert performs in California and New York because "Baseball Dreams" talks about the Chicago Cubs. It's nice (and easy) to learn about a performer through hearing him sing about their unique surroundings. I can hear variations on "You've Got To Have Patience" from any artist. But if I heard a song about alligators in the backyard - then I'd know it was someone from Florida!

Nick (and his wife Tracey) have the best of intentions and AKING SILLY FACES succeeds in celebrating pop music, delivering a fast-moving 13-song set. When my whining and ranting is said and done, location does not really matter. I enjoyed Nick Deysher's pleasant voice on this CD. I would have enjoyed a distinctive voice even more.

UPDATE: After doing due diligence, I discovered that one of Nick's previous albums is entitled COCONUT GROVE. So my question about locality has been rendered moot!
Posted by MrJeff2000 at 8:39 AM

Labels: In the Nick of Time, Ralph's World

Good and honest review! Being an In The Nick of Time superfan (full disclosre), I do have to acknowoledge that listening to his previous CDs, you'll get some additional "southern" flavor. His "Alligator Sally" (on the People, Places, and Things album) and "Coconut Groove" (on the Coconut Groove album), speak to your interest in having some additional Florida feel.

It sounds like you might enjoy some of the tracks from our other albums pertaining to South Florida, "Alligator Sally" (2009) and "Coconut Groove" (2007).

We do reside in South Florida, but I grew up in MA and my wife has lived everywhere from MD to CA. I always try to include a little bit of the local flavor, but my goal is to celebrate music from around the globe!

Thanks for the review!
Cheers,
Nick

Thanks for the input!