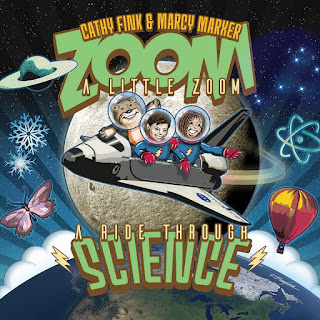 Who among us with children has not heard that term? Yet it was a revolutionary thought in 1961 to record children's music examining those concepts. It took Hy Zaret and his partner, Lou Singer, to record "Ballads for the Age of Science," a six-record series. Decades later, the most notable reboot was a campy "Why Does the Sun Shine?" by They Might Be Giants. Until now, that is, with Cathy & Marcy bringing forth a new CD to revive those tunes – ZOOM A LITTLE ZOOM.

Cathy Fink and Marcy Marxer buzz through the best of Zaret, including "Constellation Jig," "Bobo the Bear (The Hibernation Song)," "Vibration," and "Snowflake, Snowflake" (featuring midwest neighbor Justin Roberts). You can also download a PDF full of fun facts and experiments conceived by Lynn Baum, formerly of the Boston Museum of Science. The musical stylings include bluegrass, klezmer, classic rock, and 1950s old-school rock.

Zaret and Singer first experienced the civic responsibility that goes along with educational music in 1947 when they wrote a set of radio jingles about civil rights. Yes, in 1947. This is one of the more amazing footnotes in Zaret's career, which normally would have been thought to have peaked in 1955 when he collaborated with Alex North on the song "Unchained Melody."

Cathy & Marcy are trailblazers pioneers of children's and family music, with a career spanning more than 35 years. Their awards include two Grammys and others too numerous to mention. They were struck by the timeliness of the Zaret/Singer science songs, more than 50 years after their debut. And with the increased emphasis on STEM, as well as women in science, the results were a no-brainer. Or perhaps a double-brainer. ZOOM A LITTLE ZOOM won't make your children smarter. But they certainly won't squirm as much as they would from a full-on science lecture. Achieve a quiet victory at home, for zoom it may concern.

ZOOM A LITTLE ZOOM is available on March 30 from Cathy & Marcy's website, Amazon, and iTunes.

Here's the animated video to the title track from the CD: