The Birth (Journey to the Light Part 2) - Cloud Cult
Count Me In - Trout Fishing in America
Baseball Dreams - Ralph's World
Green Submarine - Flannery Brothers
Happy - Dog on Fleas
Gelt Melts - The LeeVees
Freedom Highway - Mavis Staples
So Long to the Day - Charity and the JAMband
Tommy Got In Trouble - The Bazillions
Havalina - They Might Be Giants
Come On Get Happy (Partridge Family TV Show Theme) - Daddy a Go Go
Posted by MrJeff2000 at 4:09 PM No comments:

Oompa Loompa - Willy Wonka
I Want An Alien for Christmas - Fountains of Wayne
My Funny Valentine - Ella Fitzgeral
(Nothing But) Flowers - Talking Heads
Hi 5 Dance - Flannery Brothers
Dance This Mess Around - The B-52s
Sleigh Ride - The Jimmies
Twistification - Dog on Fleas
Octopus - Artichoke
Posted by MrJeff2000 at 6:06 PM No comments:

Be Yourself - Grenadilla
Mama Tooted - Keller Williams
The Rhyming Circus - Ralph's World
It's Not My Birthday - They Might Be Giants
The Race Is On Again - Yo La Tengo
Change My Luck - The Not-Its!
Mothership Connection (Star Child) - Parliament
Bohemian Rhapsody - Glee
Every Day Is Yours To Win - R.E.M.
Posted by MrJeff2000 at 4:43 PM No comments:

Type A Prayer - Alchemystics
Little Brown Dog - The Missing Piece
Beddie Bye - Kinder Castle
Say It Loudly - The Not-Its!
Hang On - Weezer
I Shall Sing - Grenadilla
ÜBerlin - R.E.M.
Tiny Cool - Princess Katie and Racer Steve
Burning Coffee - They Might Be Giants
At the Timeshare - The LeeVees
Posted by MrJeff2000 at 4:00 PM No comments:

My Father's Waltz - Hem
So You Want To Be A Rock 'N' Roll Star - The Byrds
Gravy Waltz - Buddie Emmons
It's Hard To Be A Kid - Daddy A Go-Go
Rolling in the Deep - Glee
Hey Hey Hey - Michael Franti & Spearhead
TV - Music For Aardvarks Presents David Weinstone
Happy - Dog on Fleas
It's Close Enough - Billy Kelly
I Eat Kids - Radioactive Chicken Heads
Bicycle - Frances England
Posted by MrJeff2000 at 11:24 AM No comments:

She Hopes You Go Country

Okay I'm not a fan of country music. It's my East Coast rock mentality and upbringing. But a decade of child-rearing and kid's music have beaten down some of my defenses. Boy, what a ringing endorsement, huh?

Richmond, Virgina's own Hope Harris has released a charming collection of 16 countrified tunes, "Cousin's Jamboree," that we'll give some spins to in our CD player. [I understand that using a verb associated with record players dates me.] Hope covers some classics, such as "Down In the Valley," with the archetypal twanging guitar, and "Five Little Monkeys." If I'm not mistaken, it's officially the 5,000th recording of the song. 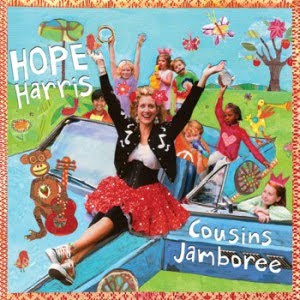 Harris' second CD, "Cousin's Jamboree" is an homage to the childhood variety shows that she staged with her younger brother. The lyrics skew to the younger crowd (songs include "I Can Do It," "Good Manners," and "Seatbelt Buckled"). After hearing Uncle Rock's "Rock and Roll Babysitter," any other tune about professional childcare immediately comes in second place.

Ably produced by Dan Zanes co-producer Rob Friedman, Harris delivers an upbeat set of light and gentle country tunes. While our 10-year-old might give us some of his beginners' eye rolling at the table manners and behavior songs, his five-month-old brother will definitely need some musical prompting in the years to come.

With a background in Broadway and Off-Broadway productions (Jekyll & Hyde, Civil War), Harris is seeking to mark her territory as a children's performer who is country but not too country. After releasing lullaby and country CDs, her next release, "Picasso, That's Who" (fall 2011) will honor great artists through the centuries. And the prolific Harris has plans for a 2012 Earth-friendly CD, "Lemonade Stand." Perhaps Hope Harris wants to be the kids' equivalent of the Indigo Girls. Perhaps she wants to be the female Dan Zanes. It will be interesting to see where her musical journey takes her in the next few years.
Posted by MrJeff2000 at 11:07 AM No comments:

I Don't Want To Know - Glee
Sunglasses - Recess Monkey
Snack Time - RTTs
The Rockford Files - Mike Post
California Dreaming - Mamas and the Papas
What Colour Is Your T Shirt? - Nick Cope
Superhero - Tim and the Space Cadets
I Gotta Feeling - The Black Eyed Peas
We R Who We R - Ke$ha
My Name Is No - Starfish
Posted by MrJeff2000 at 5:10 PM No comments:

The Daylight Strong - The Figgs
Everything's Controlled By the Brain - Doc Dauer
Wind It Up - Gwen Stefani
I Shall Sing - Grenadilla
Honey Honey - Feist
Loser Like Me - Glee
Shoo Lie Loo - Elizabeth Mitchell
Bravest Kid In The World - Recess Monkey
Free Your Mind - En Vogue
Posted by MrJeff2000 at 4:56 PM No comments:

The Verve Pipe at Kindiefest 2011

Where was I? Oh yes - after a brutal drive through traffic caused by the annual Five Boro Bike Tour, Ben and I settled in at Littlefield NYC for Kindiefest 2011.

Elizabeth Mitchell and company did a great, mellow set that featured guest appearances by Dean Jones and Heidi Swedberg.

After a break, it was time for the rockin' Verve Pipe gang. And they did not disappoint. A fun set that had guitar solos, four-part a cappella harmonies, and punny lyrics. Not to mention lots of audience singalong.

Here are some videos from there set to give you an example of what I mean:

You Can Write A Song (featuring Recess Monkey)

Here's how I know that Ben is impressed by someone - he becomes shy. Whether it was a preschool instructor that he had a crush on, or a musician that he really likes. Not that he doesn't like some of the people he's met in person, such as Ashley and the Jimmies or Molly and Lunch Money. When Ben saw that Recess Monkey was in attendance, he grew a big smile - but he did NOT want to approach them after the show.

Kind of hard to follow the iconic Van Halen version, but this was a neat kindie-fied rendition.

Cereal/All You Need Is Love

If there was ever an appropriate way to wrap up a children's music festival, here it was - a kid-friendly anthem about what else but breakfast cereal. Followed by a segue into a Beatles classic, clean-pressed for stage-filling return performers.

I may have additional thoughts on the music festival (I did not attend the Saturday sessions, so I'll leave that to others to contemplate). For next year, we will look at mass transit options (the subway stops about 1/2 mile from Littlefield) if the bike tour conflicts again. And Kindiefest is recommended! Take it from me, I've been to all three (and the STINK show before that). Kudos to the organizers once again.
Posted by MrJeff2000 at 10:53 AM 2 comments:

Ben and I suffered through 90 minutes of traffic and got to Kindiefest 2011 at Brooklyn's Littlefield very late.

How late? We missed four of the six acts. Luckily, we managed to catch the final two - Elizabeth Mitchell and the Verve Pipe.

I shot a few videos of both performances. Here are the Mitchell band songs:

Good set, crowd was really into the band. And the Verve Pipe were a complete change of pace, which helped make it really feel like a festival.
Posted by MrJeff2000 at 8:14 AM No comments:

Frosty the Snowman - Ben Rudnick & Friends
Do The Turnout - Deedle Deedle Dees
Messy Room Song - The Hipwaders
Burn It To The Ground (clean) - Nickelback
Jewish Girls (At the Matzoh Ball) - The LeeVees
Things Behind the Sun - Nick Drake
Rock and Roll - The New Standards
Super Sonic Rocket Bike - The Bazillions
Say It Loudly - The Not-Its!
Happy - Dog on Fleas
Posted by MrJeff2000 at 4:15 PM No comments: