Everything I Didn't Say – 5 Seconds of Summer
My Dad – Joanie Leeds And The Nightlights
Caught in the Screen – Secret Agent 23 Skidoo
Mothership – Mr. Saxophone
Blank Space – Taylor Swift
Best Friend – In The Nick Of Time
I Can Still Say I Love You – Keith Munslow
A World Alone – Lorde
Posted by MrJeff2000 at 3:48 PM No comments:

Wild Night – Van Morrison
Kings & Queens – The Hipwaders
If I Could Fly – Riff Rockit
Coming Back For You – Maroon 5
Go Away – Weezer
All About That Bass – Meghan Trainor
Too Much Sugar – Keith Munslow
This Little Light Of Mine – Eric Herman And The Invisible Band
Posted by MrJeff2000 at 2:38 PM No comments:

Will parenthood spoil Keith Munslow, or will it just make his children's music more focused? If you answered yes to both, then you are correct. Now the father of a boisterous two-year-old, Keith is releasing TINY DESTROYER, his new collection of tunes. 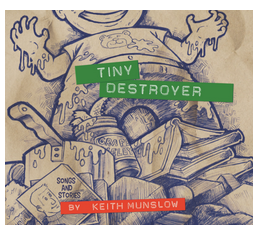 Keith's live shows are a combination of storytelling, songs, and drawings. His recordings provide a healthy dose of the first two and the tracks on his latest include dealing with groggy parents ("Dad Is Taking a Nap" and "Coffee Breath") and difficult kids (the title track and "Too Much Sugar").

Like his longtime friend and erstwhile occasional collaborator, Keith never met a phrase he didn't like to turn. At first listen, I thought he was singing about an intelligent plan and wondered why he was delving into political and scientific realms. However it's "Intelligent Clam" and the song is about a pet clam and its drive to go to Harvard and become the smartest seawater creature in the deep.

True confession time: We did most of our listening to the CD during the dinner hour, where stories tend to fade into the background during conversation. However "Old Joe's Bones" and "Princess Pepper's Story" held up in separate listenings.

Keith counts Randy Newman and New Orleans jazz among his influences, which is not a bad thing for somebody like me who shivers at world music but wants to expose the kids to a modicum of culture and diversity.  "Get Along Little Kitty" mixes a feline's affection and selfishness. "Seeing Monkeys" is a joyful ode to....food poisoning. Finally, "I Can Still Say I Love You" is a parent's lullaby to their children. And a perfect eye-dampener for any family.

Mista Cookie Jar is back with his latest song of the month. For March (and the upcoming Easter holiday), it's a quick bitty called "Jelly Beans."

The song jams a rap riff onto a surf beat and some quavering keyboards to talk up a candy lover's delight, complete with a guest vocal from 14-year-old Ava Flava.

You can find the tune here. And remember to brush your teeth after every snack!
Posted by MrJeff2000 at 8:58 AM No comments:

Runaway – Ed Sheeran
My Heart Is Open – Maroon 5 Feat. Gwen Stefani
Blink Of An Eye – Frances England
Tomorrow's People – Brady Rymer & The Little Band That Could
The Way We Gets Down – Mista Cookie Jar & the Chocolate Chips
Raised by Trolls – Key Wilde and Mr. Clarke
What's My Name? – Rihanna Feat. Drake
Posted by MrJeff2000 at 4:23 PM No comments:

If Red Tastes Like Strawberry – The Whirlygigs
Wake Up – The Neville Brothers
Little Things – One Direction
3 Pointed Back – Secret Agent 23 Skidoo
Gratitude  – Mista Cookie Jar & the Chocolate Chips
Jackie Wilson Said (I'm In Heaven When You Smile) – Van Morrison
I'm My Own Grandpa (Featuring Riders in the Sky) – Cathy Fink & Marcy Marxer
My Favorite Sneakers – In The Nick Of Time
Posted by MrJeff2000 at 2:37 PM No comments:

Dancin' Around the Mountains With Cathy & Marcy 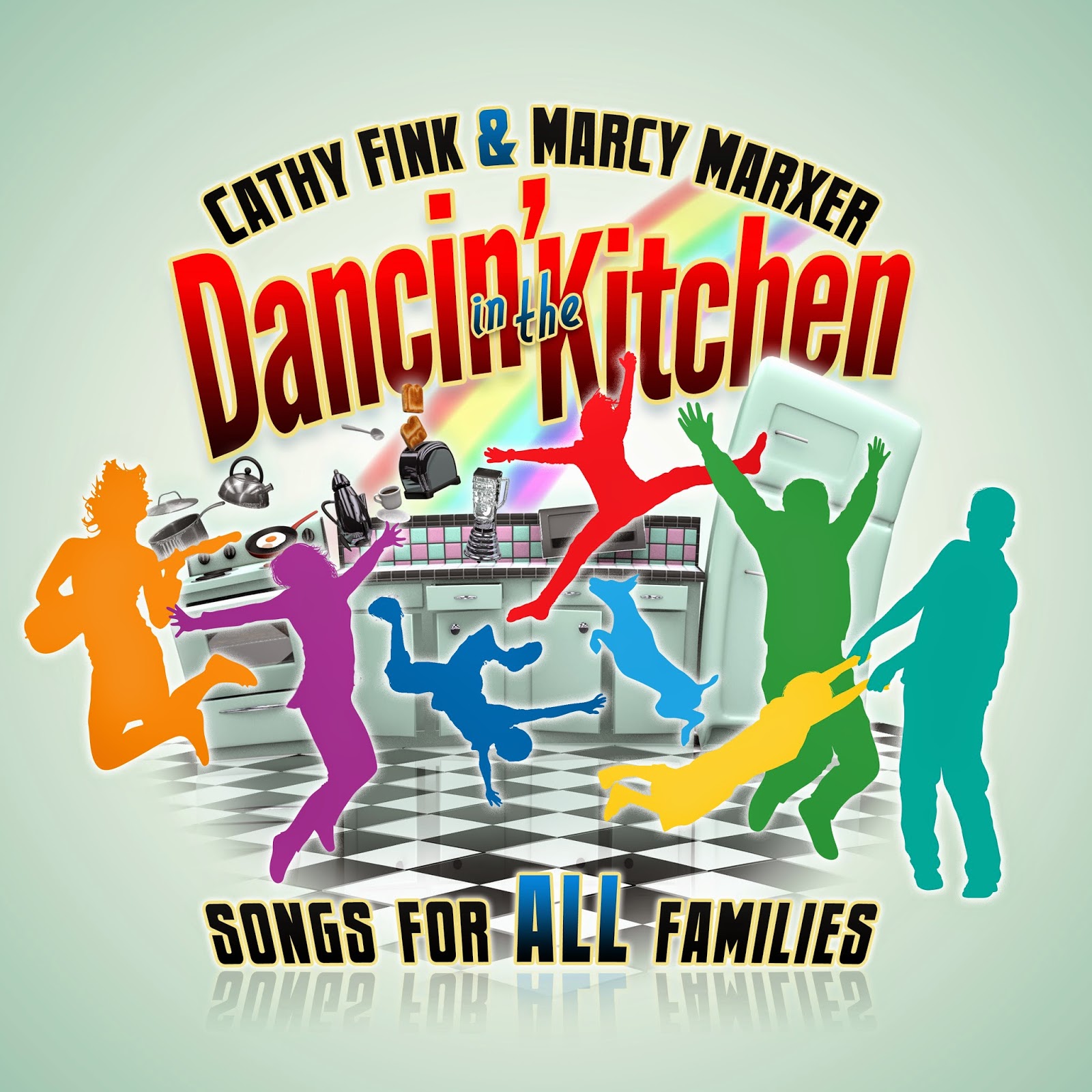 Cathy Fink and Marcy Marxer want to change your (and your family's) mind. Their brand of homespun countrified music seems diametrically opposed to the stereotypical perception of the Ozarks and Appalachian regions – theirs is a totally inclusive environment. Now stack that up against the residents of the mountain community from DELIVERANCE.

If bluegrass and banjo music are your thing, Cathy and Marcy are excellent gateways to introduce your kids to the genres. For their latest release, DANCIN' IN THE KITCHEN, Cathy and Marcy tout family as "a feeling of belonging," whether you have two same-sex parents, a transgender relative, or split your time between divorced parents. The symbolism of the kitchen is as a communal space where it's natural for people to communicate through word, music, and movement.

If you would rather concentrate on the musical aspects of the CD, stick to tracks like "From Scratch," a cover tune from Justin Roberts or "I'm My Own Grandpa" featuring the Riders in the Sky. Otherwise, the theme lands with a heavy-handed thump, typified in "Happy Adoption Day" and "Soccer Shoes," which traces the path of said shoes from residence to residence.

The production on DANCIN' IN THE KITCHEN is lean and clean. The guest lineup is packed with names such as the Savoy Family Cajun Band, Cherish the Ladies, the Canote Twins, and Kim & Reggie Harris.

The final song that is sung on the disc, "Everything Possible," harkens back more than 20 years. Originally Cathy and Marcy wanted to record the ode to unconditional parental love but were thwarted in efforts to gather a children's choir. Decades later, the world has changed enough that 35 children were gathered for the recording. That's a good thing and a progressive thing but not necessarily something I need to lecture my kids about. Especially to a four-year-old.

DANCING' IN THE KITCHEN is available from Cathy & Marcy's website, Amazon, and iTunes.

Here is the video for the title track, DANCIN' IN THE KITCHEN.

The Tale Of The Sun And The Moon – Eric Herman And The Invisible Band
Together We Can Fly – Danny Weinkauf
National Hiccup Day – The Dirty Sock Funtime Band
If I Could Fly – Riff Rockit
Haircut – The Not-Its!
Upside Down – Ratboy Jr.
Mothership – Mr. Saxophone
Got To Get You Into My Life  – Perry Farrell
Posted by MrJeff2000 at 4:45 PM No comments:

I could be clever and ask, "How many reasons do I have to recommend the Bazillions?" to lead to the equally obvious answer. 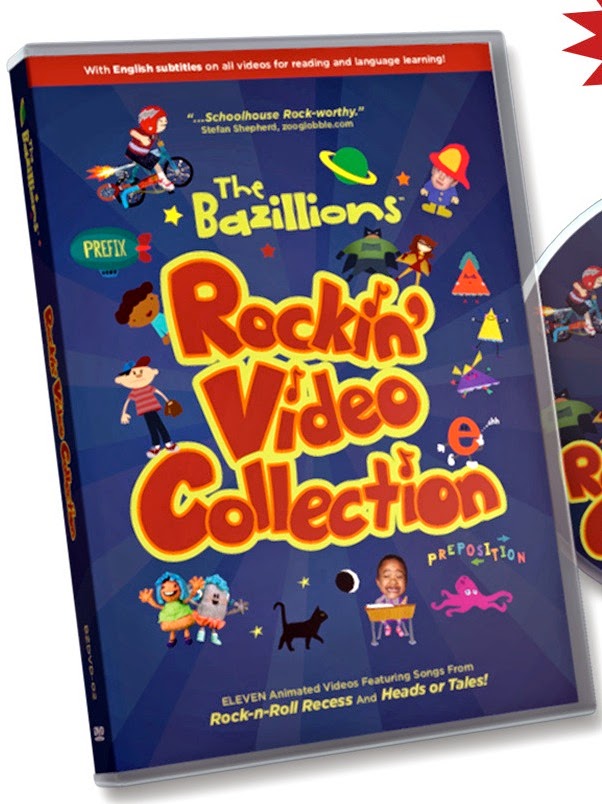 I've come down especially hard on some kid's music acts that slam the gas pedal to push "educational values." But the Bazillions don't skimp on the fun. Yes, their DVD, "The Bazillions' Rockin' Video Collection" offers up such titles as "Preposition" and "Prefix or Suffix." But they also emphasis some fun along the way, with "No Homework" and "Tommy Got in Trouble."

The creation of Minneapolis-based songwriters Adam and Kristin Marshall, the Bazillions had been writing and performing songs for their students at the Kenny School. The kids clamored for a CD, which led to “Rock-n-Roll Recess" and "Heads or Tales."

There's something to be said for well-produced educationally-themed children's music mixed with a little silliness. They Might Be Giants plowed through the genre with great success and left in a dust cloud (soon to return, I hear). Filling that void with clever videos, the Bazillions use superheroes to introduce "Similes and Metaphors" and a bevy of snapshots from an in-store appearance to create "Career Day."

The Marshalls (and their band) tout more than 1.7 million YouTube channel hits for the videos in this collection, compiled as the booming announcer would say, "For the very first time!"

The videos span the duration of the band's existence and hint at more special things to come. There's still time to get in on the ground floor in case the Bazillions decide to grow up. But then at least you'll always have this collection.

THE BAZILLIONS' ROCKIN' VIDEO COLLECTION is available from the band's website and Amazon.

Here is the video for the song, "Career Day":

Labels: Childrens Music, The Bazillions, They Might Be Giants