Put On Your Dancing Babypants

When hair bands faded out in the early 90s, they were replaced by grunge acts from Seattle (who were then replaced by etc., etc., I've made my point). Anyhow, I loved those early grunge bands - Pearl Jam, Nirvana, Stone Temple Pilots among the better known.

One of the latter day bands, The Presidents of the United States, is still going. And founding member Chris Ballew has turned his pursuits to the pleasures of childrens music. "I was drawn to make simple silly acoustic songs and realized they were kids' songs after I made them," Chris says. He began to write songs to accompany wife Kate Endle's art. "Suddenly a volcano of songs came out, and here I am!" he adds. 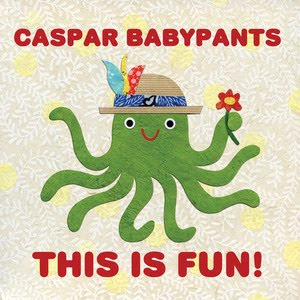 Back to the grunge - Seattle native Ballew has managed to work little traces of the city's past into his latest release as Caspar Babypants (This Is Fun!). Krist Novoselic plays bass on a kiddified version of Nirvana's "Sliver," featuring a chorus of "Grandma, take me home." And Pearl Jam's Stone Gossard in quoted in the press materials. Okay, I'm easy. You had me at Pearl Jam.

Ballew has produced his third CD of gentle, goofy tunes for kids. There isn't anything terribly deeper than "It's Gonna Rain" or "Look At All These Elepants" (the latter a favorite for my son, who claims elephants are his second-favorite animals after zebras).

With three albums in less than two years, Ballew is creating quite a body of work. I appreciated the simplicity of the arrangements and absence of heavy messaging. With support from Elizabeth Mitchell and Charlie Hope, I can only imagine that his best is yet to come.

It's a relief that Caspar Babypants exists. Otherwise, Weird Al Yankovic would have stabbed himself in the eyes a long time ago. It's true, I read the quote on Caspar's Web site.
Posted by MrJeff2000 at 7:33 AM No comments:

The one word that strikes fear into the hearts of most "kindie" families is "traditional." As in, traditional arrangement. Most kindie musicians try to put their own spin on themes, even if it comes across as yet another derivative of "The Wheels On the Bus." 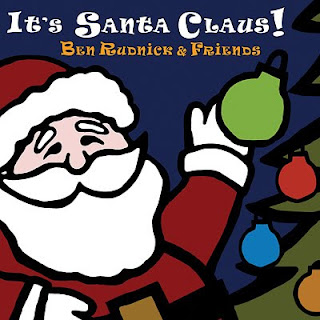 Ben Rudnick & Friends tackle that challenge with their new 2010 holiday EP, "It's Santa Claus!" Of the eight songs, only the title track is a new composition. The remaining tunes range from traditional (Jingle Bells, Frosty the Snowman) to the truly ancient (Auld Lang Syne, Greensleeves).

It's admirable for a recognized kindie figure like Ben Rudnick to roll the ball up the hill and put his spin on these songs. Then again, it's also a wise commercial marketing move - as any retailer will tell you, holiday music is a "perennial." People are still purchasing the Wilson Phillips Christmas CD!

After all that prologue, does the disc deliver holiday cheer? Well, it's not even Thanskgiving. But don't think me a Scrooge. I've spent the better part of my life avoiding the majority of holiday music. As a Jew, I've found that only a fraction of holiday music is aimed at my peeps. And most of that is done so in a tongue in cheek fashion.

With all that being said, I am a fan of Ben Rudnick. My son (also named Ben) enjoys the Ben Rudnick CDs we already have. And he learned "Frosty" a few years back for a school concert and has launched into the chorus at unexpected times year-round in the time since. He's even heard the Allan Sherman version of "Greensleeves," called "Sir Greenbaum's Madrigal."

So I wish Ben Rudnick & Friends well with their new release. And I also wish them happy holidays! Perhaps someone will give them a CD of festive music to celebrate the season... something like... well, you get the idea.
Posted by MrJeff2000 at 12:29 PM No comments:

For the second day, Ben visits his inner child (except for Amy Winehouse).
Posted by MrJeff2000 at 4:29 PM No comments:

Keller: Kids Are Music People, Too

Bluegrass anarchist Keller Williams returns to childrens' music this month with his 16th release, Kids. The (relatively) short CD zips through a host of kids' concerns and kids' interests and kids' amusements. And he makes the young animals on the cover immediate guests at the party with the first song, "My Neighbor Is Happy Again," with the refrain

but my neighbor is happy again. 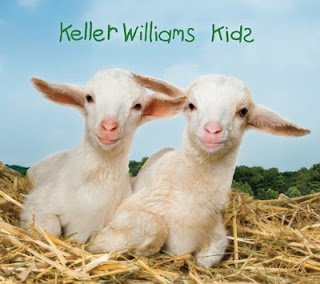 Songs stay strictly for the toddling set, such as "Car Seat," "Because I Said So," "Taking A Bath," and "Keep It On the Paper." And for people who always wanted a rational explanation of farting set to music, Keller presents "Mama Tooted."

It can sound like an elephant or a sigh

I am gonna blame it on Mama alright

Keller is currently touring with the Yo Gabba Gabba stage show as a "super music friend" and I can't see how he wouldn't be a hit with that age bracket. In the meantime, spend 30 minutes with Keller and your tots will relax. As he writes in the jacket notes, "So if this music makes you [kids] happy, then try and use your happiness to make someone else happy, too."

Mix of kids and parents rock today.
Posted by MrJeff2000 at 5:13 PM No comments:

New DidiPop and Keller Williams make the playlist this AM.
Posted by MrJeff2000 at 4:33 PM No comments:

Six new song selections for Wednesday AM!
Posted by MrJeff2000 at 4:29 PM No comments:

With an average time of less than 2:30 per song, Ben was able to choose a lot of music for Tuesday morning.
Posted by MrJeff2000 at 4:12 PM No comments:

So I was sorting through my records last week and realized I did not have the Hindu Love Gods on vinyl anymore. And it drove me crazy that I could not remember what I did with it. So I bought it online, ripped some songs to our iTunes, and Ben immediately picked one for this AM.
Posted by MrJeff2000 at 4:03 PM No comments:

Between Marleys (father and son) and Franti (Michael), Ben brought the funk this AM.
Posted by MrJeff2000 at 3:58 PM No comments:

A Bazillion Reasons To Rock Out

That's the idea behind the Bazillions' "Rock-n-Roll Recess."

"You won't believe how far we'll go," singer/songwriter Adam Marshall intones on "Super Sonic Rocket Bike." And that's a concept that kids of all ages can grasp as they race downhill...and they don't have to be 44 inches tall! 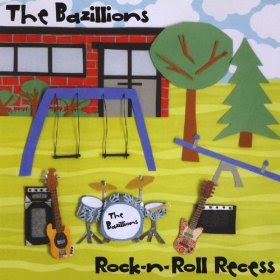 "Tommy Got In Trouble" points out that actions have consequences - balls hitting lamps and fish bowls, etc. "

Twin Cities parents Adam and Kristin Marshall started writing songs for kids when they joined the Kenny School in Minneapolis. Joined by indie pop band The Humbugs (Matt Baccoli, Tim Formanek, and Mike Senkovich), they rebranded themselves as the Bazillions and released their first CD earlier this year.

Perhaps a little too "hard" for toddlers, the Bazillions work well for the active kid set. The protagonist of "It's a Mess" brags "I'm a big success/at making a big mess."

There is a rich trove of kindie artists across the country who are currently making fresh, non-"babyish" rock music that works in the car and the home. From Recess Monkey in the Pacific Northwest to the Bazillions in the heartland and AudraRox in Red Hook, Brooklyn, you don't have to throw a ball - and get in trouble - to find music to rock out to with your children. The Bazillions are a welcome addition to Ben's expanding CD rack of contemporary kindie rockers.

Weezer, Bieber, and Strange Kidz indeed.
Posted by MrJeff2000 at 4:11 PM No comments:

It Makes You Feel Good - Renee & Jeremy
White Light - Wilco
Shake It - Michael Franti & Spearhead Feat. Lady Saw
Jump Up and Down - Flannery Brothers
Superhero - School for the Dead
You've Got a Friend In me - Bonerama
Secret Handshake - Secret Agent 23 Skidoo
Do The Turnout - Deedle Deedle Dees
What's On Your Shirt? - The Jimmies
Baby Kangaroo - Joe McDermott
Every Day is a Summer Day - Keith Munslow