The Flannery Brothers hit the ground running in the recording world. With the release of their third album in less than two years, The New Explorers Club, Mike and Dan have chosen imagination as their theme.

Kids can move their brains as well as their feet to such tunes as "Hi 5 Dance," "Let's Go!" and "In the Middle." The latter song works well with our son Ben. He became accustomed to people who hadn't seen him in a while telling him, "My, you're so big," that he began to greet people with, "I'm Ben. I'm big." This song puts his claim in context: 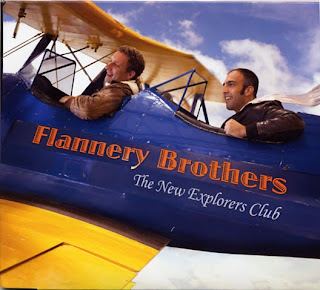 If you weren't big

And if you weren't little

You'd be somewhere in the middle.

The universe is huge

And a molecule is small

And we're somewhere in the middle of it all.

By the age of four, both brothers had become accomplished musicians. Mike (violin and guitar) and Dan (piano). But life took them in different directions. Based out of Portland, Maine, Mike Flannery spent the early part of the decade touring the country as a support act for Ludacris, Outkast, LL Cool J, and other groups. Little brother Dan left the New York corporate scene for childrens' media in Maine, where Mike had opened a recording studio.

Composing material came naturally to the duo, who produced two previous albums (Love Songs for Silly Things and Move Over Lullabies...It's Time for Wake-Up Songs). With this CD, the pair and honorary brother Jonathan Merrifield continue to mine the ripe, unlimited territory of childhood fantasy, from "Green Submarine" to "Kitchen Floor.")

It's good enough for my dog

It's good enough for me

Sometimes I want to lie down on the kitchen floor.

Running a little less than 43 minutes, The New Explorers Club is a short, fun, and entertaining trip to share with your family.
Posted by MrJeff2000 at 11:32 AM 1 comment:

Shout-outs from Ben to Princess Katie and Justin Roberts for tweeting hello!
Posted by MrJeff2000 at 4:20 PM No comments:

Ironically, I just accepted a kindiefest friend request from Rebecca Frezza.
Posted by MrJeff2000 at 4:18 PM No comments:

A shorter than usual selection, due to an early AM start.
Posted by MrJeff2000 at 4:17 PM No comments:

LeVande Is Just Grand for Youngsters

Surviving hardship gives one a different outlook on life. Not the lead you expected for a childrens CD review? Sorry...but Meredith LeVande had a rough start in life, endured, and matured to promote expressive songs for toddlers through second graders.

Meredith's father abandoned the family after she was born. Her mother subsequently became mentally incapacitated and Meredith was raised by an elderly grandmother - who died when she was 15. The teen turned to music for help her through the tough times, supporting herself and her mother. As Meredith put it, "The one thing that offered me a sense of identity and safety was singing."

Meredith's second childrens CD, "What Are The Odds?" was released this month, under the umbrella title Monkey Monkey Music, which she uses for all live performances, CDs, and DVDs. The Monkey moniker allows Meredith to differentiate from her adult singer/songwriter appearances. 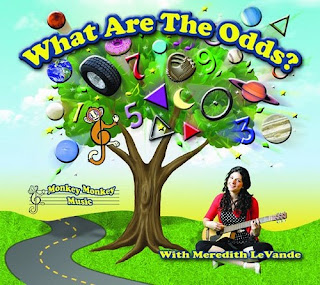 Offering children a chance to monkey around through music, Meredith's songs urge kids to get up dance (Shake It Loud and Turn Your Body Around). But there is more on her agenda - such as connecting with family (Circle), the power of music (Guess What I Am), and simple math skills (the title track). And she doesn't mince words about how all creatures live, in Frogs Eat Butterflies:

Sharks eat seals but I don't want shark in my dish.


Five years is an eternity in the recording industry, especially for younger audiences, who "age out" of their favorite artists in 2-3 years. But Meredith took five years to construct her second CD, building her songs from interactions with children rather than on a set recording schedule.

And Meredith's personal and professional life took off from such soap opera beginnings, including a bachelor's degree in Women's Studies and English from the University of Rochester, a law degree from Brooklyn Law School, and a master's degree in music from SUNY Purchase Music Conservatory.

Meredith's happy ending is getting married, living in New York, and continuing to share positive values for children through her music. Her Web site has song clips and games, as well as music videos. Kids could do worse than learn a few life lessons from someone like Meredith, who knows how to set goals and persevere.
Posted by MrJeff2000 at 10:23 AM No comments:

More new selections as August rolls to a close (groan).
Posted by MrJeff2000 at 4:48 PM No comments:

More new selections as August rolls to a close (groan).
Posted by MrJeff2000 at 4:48 PM No comments:

Some new selections by Ben for the start of the weekend.
Posted by MrJeff2000 at 4:30 PM No comments:

Moving more into the twenty-first century for Thursday.

And Recess to Einstein's Monkeys this AM.
Posted by MrJeff2000 at 3:45 PM No comments:

More 80s music today. Perhaps I should start ripping more songs from the 90s.
Posted by MrJeff2000 at 4:40 PM No comments:

Some greatest hits of the '80s with Hall and Oates and Paul McCartney. Plus Paula Abdul for added value.
Posted by MrJeff2000 at 4:02 PM No comments:

Where Does The Sun Go At Night? - Dorothy Collins
White Light - Wilco
Autumn Sweater - Yo La Tengo
Speak the Truth - Secret Agent 23 Skidoo
What A Wonderful World - Louis Armstrong
Coconut Woman - Karl Zero & THE Wailers
Sing Like a Sparrow - Dean Jones
So So Happy - Debbie and Friends
The World Has Turned and Left Me Here - Weezer
The Rhyming Circus - Ralph's World
My Brother The Ape - They Might Be Giants

How Many Times - Mel Glazer
Opposite Day - Secret Agent 23 Skidoo
Are You Gonna Eat That? - Keith Munslow
Let's Not Fight (Feast of Lights) - They Might Be Giants
Kugel - The LeeVees
Uptown Girl - Weezer
What Do You Like More? - Robin Vaughn
Periodically Double Or Triple - Yo La Tengo
Anakin's Betrayal - John Williams
Funplex - The B-52s
Hummingbird - Wilco

Hmmm... more Daughtry and no Weezer again. Somebody might be switching his hard rock preference.
Posted by MrJeff2000 at 4:10 PM No comments:

Usually Weezer and Wilco go hand in hand for Ben, but not this AM.
Posted by MrJeff2000 at 6:16 PM No comments:

Stadium rock returns with Europe!!!
Posted by MrJeff2000 at 4:19 PM No comments:

Busy Sunday. Just getting around to posting this AM.
Posted by MrJeff2000 at 4:07 AM No comments:

New acoustic Weezer! Ben was ecstatic.
Posted by MrJeff2000 at 4:55 PM No comments:

From Fergie to Dino this morning.
Posted by MrJeff2000 at 5:13 PM No comments:

Weezer, Katy Perry, and all your modern favorites.
Posted by MrJeff2000 at 4:29 PM No comments:

Mostly newer stuff for tomorrow AM.
Posted by MrJeff2000 at 4:27 PM No comments: