Children's music can take you in some crazy directions. Now I've made the science-to-Mad Men connection. Recording artist Dan Crow has released a new STEM (Science, Technology, Engineering, and Math) EP, CONCOCTIONS. In researching his bio, I discovered that Dan wrote songs for a 1994 special, "Hanukkah Tales and Tunes." Who wrote that special? Matthew Weiner, who then wrote for HBO's The Sopranos and created AMC's Mad Men. 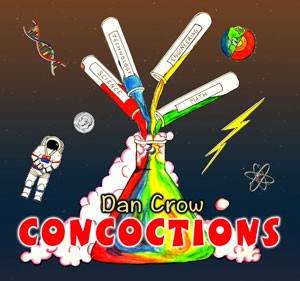 But I digress. For more than 25 years, Dan has written and performed children's music. His signature composition will remain the theme from the movie, "The Adventures of Milo and Otis." But he adds to his repertoire with CONCOCTIONS – five songs (with karoake instrumental tracks that follow) related to the various principles of STEM. While I prefer They Might Be Giants' song "Seven" to the one of the same name here, there's a fun and practical purpose to "You're An Engineer." There's more than one kind, you know, as I reminded my train-engaged youngster.

There's a huge push to promote the sciences (and education as a whole). I seldom see (or hear) politicians talk about school, except as an adjunct service that must be provided to everyone except natural-born citizens. But education holds the key to engage children and make them aware of a larger world, where the laws of physics and nature hold true, no matter your affiliations or spiritual beliefs.

Dan Crow sings very clearly about "Science Science Science" and "Technology" as fundamental underpinnings of the planet. "Franklin D. Dime and Abraham Penny" instructs kids that the word "change" can be a double entendre they can bank on. I initially mistook the name of the EP as "Connections," which would have been appropriate as well. CONCOCTIONS is all about tangibly helping create a future and that's what kids are all about. At least when they're not being stubborn.

CONCOCTIONS is available through Dan's website, Amazon, KidzMusic.com, and iTunes.

Here's a video produced to Dan's song, "Take A Walk Outside":