While reviewing music, I get mixed feelings when I see the word "Traditional" listed under the title of a song. On the one hand, it means the performer is seeking to pay tribute to one of his favorite classics. On the other hand, it's a way to reinvent tunes from a genre or transport them into the modern era. Still others just want to cultivate some familiar, public domain material. 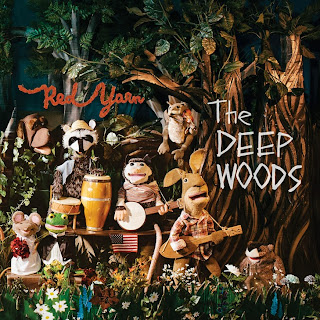 Andy Furgeson (aka Red Yarn) went one step further. He spent five years persuring (and acquiring) a grant that enabled him to record a plethora of archetypal folk songs. The result, THE DEEP WOODS, arrives this month.

In his unique position as a musician/puppeteer, Furgeson became intrigued by the role of animals in music. He delves deeply into their importance in the lives of American settlers and farmers, selecting such numbers as "Mr. Rabbit" and "Froggy Went A'Courtin'."

You won't find any synthesizers or electric guitar solos on THE DEEP WOODS. If your kids are interested in acoustic music or authentic Americana, this is a must-have collection. The Deep Woods serve as a metaphorical playground for all the characters that Red Yarn has brought together from all corners of folk lore, such as "Bob the Rabbit" and the "Turkey in the Straw." For anyone who loved Creedence Clearwater Revival's version of "Let the Midnight Special," there's even a reprise here inside "The Fox."

Red Yarn is about as far away from the kindie scene as one can imagine. Yet it sounds like it's been a part of it for decades. That comes from the care and craftsmanship that Furgeson has taken to recreate the sound of these songs for today's children, who have many more distractions (hence the puppeteering aspect of the workshop). It may take a small effort to get your kids into THE DEEP WOODS, but they may enjoy some time there.

THE DEEP WOODS is available on October 8 from Red Yarn's website and Bandcamp.

Here is the video for their song, "Tails":