The phrase "one man band" conjures up imagines of carnival performers with harmonicas around their necks, symbols on their knees, and a drum kit at their feet. Quite a contraption. Human Tim + Robot Tim is also a one man band, but quite a contraption of a different kind. 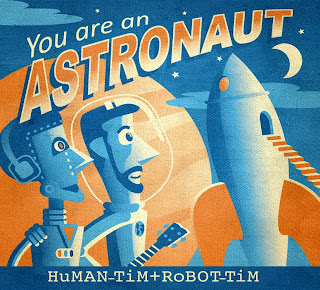 Illinois-based Tim Knuth taught preschool music. In his own words, he "never met a musical instrument he didn't like." Several years ago Human Tim built himself a robot and embarked on a career as a children's recording artist. Tim took what he'd learned as an educator, ran some algorhythms, and released two CDs. The latest, YOU ARE AN ASTRONAUT, invaded our universe this summer.

Robot Tim provides the science ("Jump On the Moon") and Human Tim provides the heart ("I See You Smile"). Together, the duo (or is it the uno) make pleasant kidpop that delivers smiles. There's just enough message so parents and children alike won't engage in eyerolling.

"Little Bob's Big Day" is a reworking of Bob Dylan's "Homesick Subterranean Blues," taking the form of all the activities in one day of a child's life, performed in an unassuming. laid-back fashion:

Down on the corner there's the fixin' up the street guys.
Blacktop, steamroller, you can see the heat rise.
Sail down the gutter in a little paper boat,
The sun comes out and I'm sweatin' in my coat.
High-speed helicopter, built it out of Legos.
You don't need a Whirly-Bird to see which way the wind blows.

You can definitely feel Robot Tim's influence on such songs as the title track and "Imagine That." But Human Tim manages to ground the CD with  "Milk + Laughter" and the gentle "I Am A Horse," which closes the disc. Human Tim + Robot Tim may not have designs on taking over the world, but they can surely command a spot in your child's CD collection.

YOU ARE AN ASTRONAUT is available on Human Tim + Robot Tim's website, Amazon, CDBABY, eMusic, and iTunes.