The contract with the drivers union expired this year.

The outgoing contract had a clause guaranteeing jobs to the most senior drivers (a kind of "tenure" system).

The City had this clause struck down for one specific contract (for K-2nd grade) and do not want to include it in the new contract.

Hence, the drivers threatened and ultimately went on strike on Wednesday, January 16. 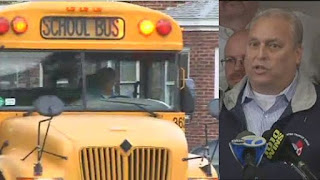 I am siding with the Department of Education (shockingly).

Seniority does not equate with competency.

You've never heard someone talk about their days in high school and fondly reminisce:

"Mr. Johnson was my favorite teacher because he had 22 years seniority!"

In the same vein, you never hear baseball commentators say:

"Marvin Jackson is the best outfielder because he's been playing for 23 years!"

If the Major league baseball players union tried to include a clause stipulating that the most senior players be guaranteed roster spots, you'd hear MLB owners laughing in the streets.

School teachers have this kind of tenure, but it's being challenged at high levels across the country, in exchange for merit and performance rewards.

Our son Ben had a driver/matron last year with whom he shared a great rapport. They would play Z-100 Radio and he would talk about the singers and songs with them. After six weeks, they were suddenly replaced by a new driver and matron. The driver maintained radio silence and would chastise the children on the bus if they talked too loudly.

What was the reason for the switch? If you're a senior-level bus driver in the NYC system, one of the perks is that you get to cherry-pick the route you want to drive. How does this benefit the children on that route? It worked against our son.

This year started with a peculiar incident. Ben came home wearing sweatpants, his "backup clothing" sent in the first day of school. We emailed his teacher, who said that the matron misinformed the bus liaison that he had pooped his pants. He had not. Some child on the bus had gas (not Ben) and they blamed him and ordered him to change his underwear and pants (which were clean and in a plastic bag).

During Hurricane Sandy, the bus company that runs our son's route lost all communications. Their facilities were flooded and they relocated. Both contact numbers were dead. We told the Office of Pupil Transportation that we were being forced to relocate due to no power or heat and THEY said they'd contact the bus company. It didn't happen. And the driver and matron REFUSED to pick up or drop off our son at a different location, even though WE would still be there at the doorstep of my brother's house, one mile from his usual spot (our house).

When I approached the driver (with paper and pen in hand) and asked how SHE contacted the bus company, she replied, "I use the bus radio" and would not give me an alternate number. In her universe, following the rules to the letter, despite extraordinary circumstances, could not get her into any trouble.

Worst of all was a situation that happened in April 2010. Our driver had lots of seniority. An older man, he suffered a heart attack WHILE DRIVING THE BUS. Before dropping off our son and another child, he crashed into a storefront. I called the bus company to check on his condition but also to insinuate that we would not be happy if he returned to drive on this route.

In our experiences, it was the less-senior drivers and matrons who performed better and handled situations more gracefully. The number of years they had been doing their jobs was not a factor to us. It was their attitude and professionalism, as well as their knowledge of the roadways and traffic conditions.

THESE should be the overriding factors in negotiating a new contract between the CIty and the drivers union. Anything else is hype and smokescreen.

We hope to get this matter squared away sooner rather than later. I transported my son to school today and leave to retrieve him in less than two hours. But that's a column for another day.
Posted by MrJeff2000 at 9:14 AM