It's hard to carve a niche for yourselves in the children's music scene. You wouldn't it possible, but lots of categories are locked up: Princess Katie & Racer Steve are a premier costumed act and Dan Zanes is the gentleman folksinger. 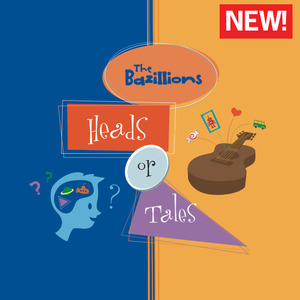 Now the Bazillions have rightfully claimed their spot as the kids band comprised of geek rockers. Minneapolis' own Adam and Kristin Marshall used their backgrounds as educators at the Kenny School to create a curriculum of tunes for their band's second CD, HEADS OR TALES.

It's not often that you hear kids songs with titles like "Similes and Metaphors," "Triangular Triangles," "Prefix + Suffix," and "Perimeter Around the Area." But the Bazillions makes the concepts work – and the results are informative and rocking, at the same time.

The Bazillions operate on a neat concept. Take a premise that kids will relate to and don't skimp on the rock. For instance, "Out of the Box" deals with the anxiety that accompanies the opening of a desperately-wanted new birthday/holiday present:

The band explores the pitfalls of parenting in "You're Embarrassing Me," the annoyance that kids feel every afternoon in "No Homework," and the frustration of bad weather in "Rainy Day Clubhouse." The Bazillions make sure to divide the CD between songs with wordplay and smarts ("Silent E") and just being a kid ("Candy Garden").

Like any band where music is quietly the "job on the side," the pitfall of the Bazillions is that it's taken two years (a long way from a bazillion) to produce another collection of songs. Take advantage while the CD is still fresh. Ben (11 years old) has not taken "Super Sonic Rocket Bike" out of his rotation since we first heard it in 2010. And heading into 2013, check out their live schedule. Now sharpen your protractor, it's time to rock out with your local lunch lady.

Here is the video to "Super Sonic Rocket Bike" from the Bazillion's first CD, ROCK-N-ROLL RECESS:


HEADS OR TALES is available from the band's website as well as CDBABY, Amazon, and iTunes.
Posted by MrJeff2000 at 9:43 AM